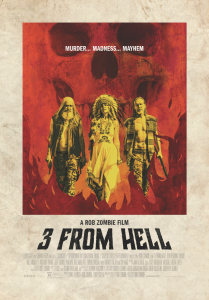 If you didn’t catch Rob Zombie’s 3 From Hell during it’s 4-night-only theatrical release, it’s now available on 4K, Blu-ray, and DVD—and it will soon be coming to Shudder. The horror streaming platform has acquired exclusive streaming rights for the title in the U.S. and Canada.

In the film, which is a sequel to Zombie’s House of 1000 Corpses and The Devil’s Rejects, the surviving members of the Firefly family are languishing in prison following their bloody shootout with the police. But after Otis (Bill Moseley) and Baby (Sheri Moon Zombie) escape and team up with Otis’s half-brother Foxy (Richard Brake), they’re ready to unleash hell upon the world once again.