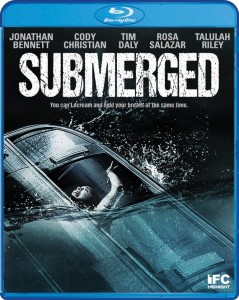 Steven C. Miller’s (Under The Bed, Extraction) Submerged is now gearing up for a DVD and Blu-ray release courtesy of Shout Factory. The film follows a routine job going awry as a limousine is driven underwater by a group of ruthless kidnappers. It becomes sink or swim, live or die, as the criminals dive in to finish off what they’ve started.

The decision to create a film that is – from what we can tell – mainly set in one watery location is a bold and brave choice. Films like Buried and The Descent have proved that claustrophobia is a great fear to play on and a sure way to ramp up the fear in your audience. If Submerged can mimic the build-up of suspense in these films then we could be in for another simple shocker.

We will be able to see how Submerged tackles the tight spot when it is released on DVD and Blu-ray on 3rd May 2016. Check out the intense trailer below which is action-packed, tense and a teeny bit emotional.