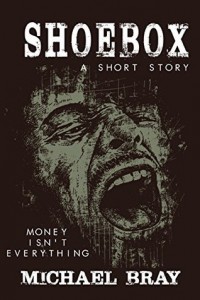 Shoebox is a horror short by Michael Bray. Lee Schofield discovers a shoebox in his back garden containing £180,000. Enough cash to rebuild his life and get his girl back, first job, get it hidden and then count it, after losing a litre of drool.

This treasure-trove manifests as paranoia that creeps through his mind like the most unwanted of visitors (looking at you mother-in-law). First problem, his lodger, does he know? He knows alright and he wants it, he wants it bad and he’s going to take it. Lee’s got to stop him and keep hold of his cash.

He joins Paranoids Anonymous.
Who never meet in case anybody finds out.

He can’t sleep, he’s desperate to ensure no-one takes his money and the only way, Billy Blade with a pat on the back. There’s a bit of a twist toward the end but it wasn’t a massive surprise, Shoebox is a well written short story, just under an hour on audio. I’m always in two minds about Chris Barnes as a narrator, he’s ok in short doses but I don’t think I could listen to him for a full length novel. And he didn’t join Paranoids Anonymous, he fell into a pit of spikes while searching for the members.