Shock! Horror! Astounding Artwork From The Video Nasty Era by Francis Brewster, Harvey Fenton and Marc Morris is a wonderful British compendium of movie posters and VHS box covers. These are the titles that were demonized by overzealous British censors on a foolish mission to impose their own sense of morality on the horror loving public. During the 1980s, horror movies were seen as the root cause of corrupting youth, violence and pretty much all of society’s ills.

The Conservative government passed the Video Recordings Act of 1984, which gave the British Board of Film Classification (BBFC) the power to ban and enforce cuts on movies. Previously released films also had to be resubmitted to bear the scrutiny of the censors. Some of the highest profile titles to suffer the wrath and be deemed obscene were Driller Killer, I Spit on Your Grave and The Texas Chainsaw Massacre.

The years leading up to the video nasty era featured some of the most vibrant and imaginative film posters and video covers you would ever see, way better than what you get today. Back then, instead of the plethora of message boards, reviews, websites and social media, it was the humble video cover that had to convince you to watch the movie. It had to shock and hook you to get an edge over rival titles. There was a lot more competition from smaller studios too, each vying for viewers for their films. 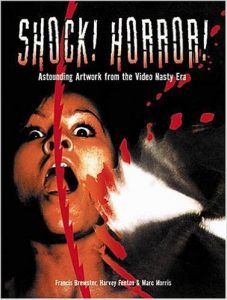 Shock! Horror! covers mostly the lower profile independent and small label horror movies. The artwork is fantastic and well reproduced in this book. It’s in full colour, with full page movie posters. It’s a must for horror and exploitation film fans – the ultimate coffee table book. Most of the book is made up of posters and then at the back are the full VHS covers with details about the films, why they were banned, details on cuts and production information. The commentary and information provided is rich and fascinating, adding a further dimension to the book. It’s a wonderful examination of one of the most interesting periods of horror home video.

This book is an absolute joy and I never tire of flipping through. It will make you want to try to find as many of these horror treasures as you can.