Synopsis:
Writer Jack Torrance (Jack Nicholson) takes a job as a caretaker at the isolated, mountain grounded Overlook hotel. After relocating to the Overlook with wife Wendy (Shelly Duvall) and young son Danny (Danny Lloyd), ghosts of the hotel’s former residents turn up to terrorise the Torrance family and slowly turn Dad Jack into an axe-whamming psycho. 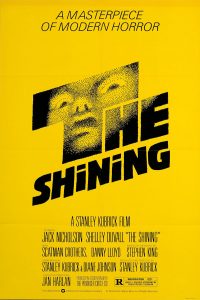 Considering the universal love for and general genius of Stanley Kubrick’s The Shining, it is a wonder how this longer American cut has never made it to the UK before. Despite commonly appearing on British terrestrial television throughout the 80s and 90s, this slightly slacker US version has never been readily available to rent or purchase on any UK format, until now. Thanks to the BFI and Warner Bros, a razor sharp new Blu-ray release of the full, original film, running an extra 25 minutes longer than the commonly available version, has finally arrived. Yet, while the “extended edition” feels more sinuous it ultimately doesn’t improve on, or weaken Kubrick’s final masterpiece. While the extended edition is flabbier with some superfluous scenes, a lot of the extra material also provides extra context, character depth and heightens tension during The Shining’s more familiar moments, despite not being overly imperative in terms of driving the narrative.

Following The Shining’s original US release on 23rd May 1980, Kubrick felt his film needed further refining, so cut scenes prior to its UK debut in October of the same year. While the shorter version is certainly denser, concise and more manageable than its US counterpart, some of the severed scenes inform the story and viewer’s understanding of character backgrounds, while fortifying previously seen sequences with added trepidation. Extended scenes featuring Scatman Crothers’ Hallorann are indubitably galling, as are those featuring Jack and family being escorted around the grounds. One scene featuring Danny being examined/ diagnosed, offers insight and depth into his disorder, while creepy “new” moments come courtesy of a lounge loaded with cobweb covered skeletons and extra red-rum blurting from Danny/ Tony. But sadly there is still no sign of the infamous hospital epilogue where Danny and Wendy are informed by the authorities that they have been unable to locate Jack, or find any sign of supernatural activity at the hotel. 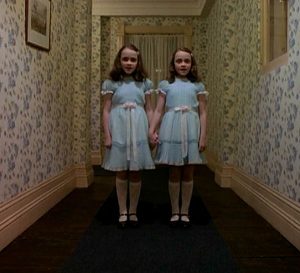 From the oft-mimicked/ spoofed sequence featuring the Grady twin ghosts (Louise and Lisa Burns), inviting Danny to come and play with them, to the lurid/ retro pattern of the Overlook’s carpet which can now be found printed on tie-in apparel like umbrellas, ties, lamp-shades and mittens, Kubrick’s The Shining is revered for so many reasons. Immortalised by the iconic image of Jack Nicholson peering through the jagged crack in the bathroom door while maniacally announcing his arrival with “Here’s Johnny!”, other images/ aspects have since gone on to cement themselves into our zeitgeist (the blood lift eruption, aerial shot of the maze, Jack staring intently from the hotel window as the camera crawls towards him and the also the classic line “All work and no play makes Jack a dull boy”). The Shining is not just an imperious horror per se but a progressive art masterpiece. From the distorted, foreboding score by Wendy Carlos and its classic incorporation of Berlioz’ “Dies Irae” from his Symphonie Fantastique, the helicopter soaring opening credit sequence and Danny’s petrifying visions / bloody flash-cuts. So many components are compelling, unparalleled and work wonders within the context of a haunted house picture. Yet The Shining is teeming with so many stings and twists, there is no chance of it being pigeon holed into a sub-genre. 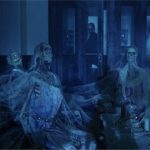 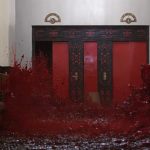 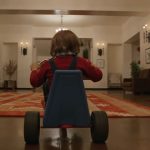 The fact that the film is so open to interpretation makes re-watching The Shining all the more compelling, and especially frightening for those particularly attuned to its lunacy. Other key elements which aided its slow ascent in status include Vivien Kubrick’s classic documentary “The Making of The Shining”, which can be found as an extra on the new Blu-ray. Her short provides controversial insights into the nature of her father as a film-maker, while in 2012, documentarian Rodney Ascher delivered the excellent Room 237: a film in which fans and scholars provide and pontificate on supposed hidden meanings/ subtexts within the film. Room 237 doesn’t feature in the special features here but documentary, “View from the Outlook: Crafting the Shining”, serves as an equally absorbing acumen, as does “The Visions of Stanley Kubrick” in which various film-makers dissect and express their love for the master film-maker. Also included are a trailer, commentary by Vivian Kubrick, Steadicam inventor Garrett Brown and film historian/ Kubrick biographer John Baxter.