She’s Waiting for You in this Poster for American Conjuring

A damn terrifying poster has been unleashed for American Conjuring – which has absolutely nothing to do with The Conjuring, James Wan or the Warrens, for your information – and it’s freaky as hell. American Conjuring comes from directors Dan Walton – who is making his feature film debut – and Dan Zachary (Darkest Hour). 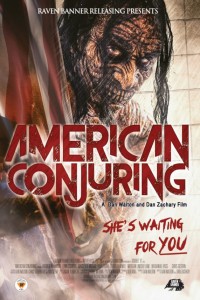 Synopsis:
A young family moves into an abandoned orphanage home and experiences tormented spirits of a woman who killed herself in the basement.

It seems like a pretty standard supernatural storyline, but if you watch the trailer below you might be pleasantly surprised by the amount of effective scares in there. It looks to be bursting with a dread-filled atmosphere and the monster at the heart of the haunting looks impressively petrifying.

American Conjuring, which was originally titled Bind, will be released in the UK on 8th August and in the USA on 6th September.