She’s Free and Frightening in this Clip from Siren

The ‘Siren’ segment is probably the strongest part of V/H/S and the idea to extend the narrative into a feature film was a good one. The segment followed a group of guys who bring home a couple of girls after a night out only to find one of them has vampiric tendencies. It was gruesome and a lot of fun to see the partying lads get what they deserve. 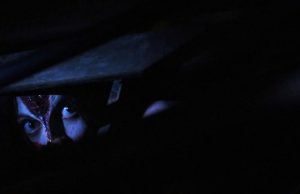 Synopsis:
Siren is a horror-thriller about Jonah, an apprehensive groom-to-be whose bachelor party turns into a nightmare when he frees a seemingly innocent victimised girl locked up in a supernatural sex club. Her ruthless handler and proprietor of the sex club will stop at nothing to re-capture his prize. Jonah struggles to rescue the girl only to discover it is he who needs to be rescued as he comes to the realization that she is a dangerous fabled predator who has chosen him as her prize.

Check out the clip below which shows, from a very Shining like perspective, Jonah unwittingly unleashing the predatory woman and watching as she dismembers her victim. Men may want to watch with caution, because it ain’t pretty.

Siren will be released in select cinemas on 2nd December, before being released on VOD on 6th December.