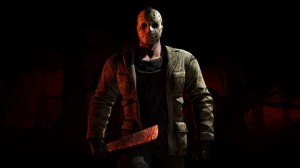 As he slowly stalks you through the shadows, dragging his machete behind, you repeatedly smash him in the face, only to be greeted by an unflinching Jason Voorhees plunging the sharp end through your face. That could be your fate if you end up playing against Jason Voorhees in Mortal Kombat X.

NetherRealm provided us with the first glimpse at pure carnage today as Mortal Kombat X’s first downloadable fighter, which happens to be iconic horror figure Jason Voorhees. The highly anticipated character has been replicated in game form, as his figure, stance and slow preying characteristics are playable, ending with fast and powerful strikes.

One feature that means there will be plenty of gore is Voorhees classic kill techniques are used throughout the characters game play. We’ll see his life-consuming death grip around components throats, his heart punch from Friday The 13th 6: Jason Lives and obviously a collection of gruesome machete KOs. Voorhees also seems to possess the ability to stroll through projectiles as if he’s some kind of ghost, but it’s most likely just because he’s basically invincible.

In Mortal Kombat X every character has three distinct fighting styles and the trailer for unrelentless Jason Voorhees shows us one with his scream inducing machete, one without and the last one we’ll have to wait to find out until we get our chance to massacre someone.

Mortal Kombat X is available now for PlayStation4, Xbox One and PC. It will also be available on PlayStation3 and Xbox 360 a little later in the year on June 2nd. Jason Voorhees is available for download from May 12th 2015, but those that purchased the kombat pack will have early access from May 5th 2015.