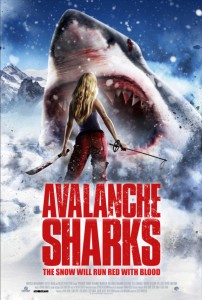 This year might very well be the year of the shark, as it seems everyone is going fin crazy. We’ve seen sharks in tornadoes, sharks used as planes, intelligent lake sharks and much more, but now we have Avalanche Sharks. Scott Wheeler, known for his visual works on other shark films Sand Sharks and Mega Shark vs. Giant Octopus, will direct the film. We now have the trailer and it’s obvious that sharks are one of the world’s scariest monsters, especially when they’re out of water.Starring in Avalanche Sharks is Alexander Mendeluk (Twilight), Kate Nauta (Paranormal Abduction), Benjamin Easterday (Poseidon Rex), Eric Scott Woods (Sand Sharks) and Kelle Cantwell (Dead Girl).

The snow-covered shark saga will be available on Amazon, Google Play, iTunes, Vimeo, VOD and On Demand from June 30th 2015.

Synopsis:
Mammoth Mountain holds host to the busiest event every year, Bikini Snow Day, where the resort becomes filled with co-ed’s looking for a party. During the fun an unexpected avalanche erupts, awakening the ancient snow dwellers – enormous sharks with a real craving for some young blood. The local sheriff has to create an unwanted allegiance with locals and partiers in order to fight against the monstrous creatures.