Sharknado 6 Will Fight Dinosaurs, Nazis and Ride on Noah’s Ark 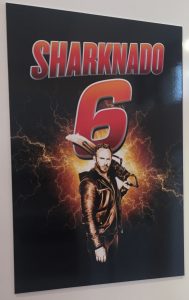 Yep, you read that right. Just when you thought the Sharknado franchise couldn’t’ get any crazier, it proves you wrong. The sixth instalment in the ‘nado franchise will travel back in time as Fin realises it’s not about how to stop the Sharkandos, but when. This leads him to fight Nazis, dinosaurs, knights and hitch a ride on Noah’s Ark. Mental.

Who would have thought we’d still be in the midst of a Sharknado world when Syfy released the first film back in 2013? I certainly didn’t. Alas, there’s definitely a market for it and if audiences are going to flock to see Fin and co. over and over again, we imagine the end is definitely not in sight.

Sharknado 6 will be released this summer on 25th July and will star Tara Reid, Ian Ziering and Cassie Scerbo.