SHARK HORROR THE REEF GETTING A SEQUEL 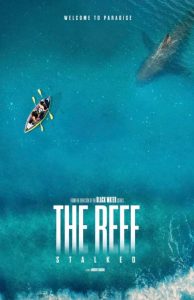 Released in 2010, writer-director Andrew Traucki’s tense horror film The Reef saw a great white shark hunting the crew of a capsized sailboat along the Great Barrier Reef. Ten years later, pre-production has begun on a sequel—and Traucki is returning to direct!

Titled The Reef: Stalked, the sequel was once again written by Traucki and will follow a woman named Nic who is left traumatised after witnessing her sister’s horrific murder. In an effort to heal, Nic, her sister Annie, and two close friends travel to a remote Pacific island for a kayaking and diving adventure—but only hours into their expedition, they are stalked and then attacked by a massive Great White.

To survive, the women will need to band together. At the same time, Nic must overcome her post-traumatic stress, face her fears—and slay a monster.

The Reef: Stalked is scheduled to shoot in Australia during the country’s upcoming fall season, and is slated to release sometime in the summer of 2021. Michael Robertson and Neal Kingston are producing.