In a recent interview about his upcoming Predator sequel The Predator, director Shane Black shared the tentative name of the script’s lead character, and discussed his hopes for the film’s release.

Quashing any hope that Arnold Schwarzenegger’s Dutch would lead the new film, Black told Empire that: “The name I’ve given the [hero] in ‘Predator’ right now is Quinn Mackenna. And that may change.” This in no way means we won’t see California’s former governor make an appearance however, with Black (who played Hawkins in the 1987 original) previously telling Collider that bringing back Dutch is “…something we’re looking into.”

Black also lamented to Empire about the increasing dominance of internet buzz and rumours in audiences’ consumption of new films, explaining his desire for The Predator to be an event movie the likes of which we don’t really see nowadays.

“We live in a culture where everyone’s like, ‘[I want to] know everything about it before it comes out, and I want to be able to see every moment, and I’m gonna go back and forth on the goddamn YouTube channel and get every goddamn moment and every Easter egg’,” he said. 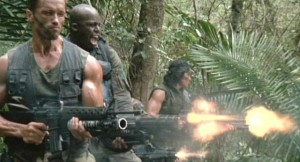 “I’ll tell you a little bit about it. It’s an attempt to event-ize The Predator and make it more mysterious. The Predator has been so overdone in a way —very low budget with a guaranteed return, every couple of years there’s a knock off churned out. It’s gotta get to the point where people buy their tickets in advance instead of saying, ‘Oh honey look, another Predator movie. No, Adam Sandler’s got this thing on TV, let’s do that instead.’ I want people to say, ‘The Predator is coming, I know it’s coming, we want to see it, it’s mysterious, interesting, it’s got the same sense of wonderment and newness that Close Encounters had when that came out.’ That’s what we want. That’s very impossible to achieve, but we’re going to try.”

Fox recently moved The Predator’s release date forward slightly, to February 9th, 2018, which still seems a hell of a way away.