On Saturday, Shane Black tweeted: “Monday…the hunt is on.” That means that as of this week, filming is now underway on The Predator, Black’s franchise reboot and sequel to the 1987 action-horror in which he co-starred alongside Arnold Schwarzenegger, Carl Weathers and Bill Duke.

Even, better, Black put to bed any fears that he may be toning down the violence levels for bigger box office appeal, taking to Twitter again to say:
“And, just to be clear… PG-13 is for pussies. Spines bleed… a lot.”

Hoorah! Good news for all, then. The kiddies will just have to wait for the home release. That’s how I watched the original as a young ‘un, and it did me nothing but good, I’m certain.

Written by The Monster Squad/Night of the Creeps director Fred Dekker and directed by Black, The Predator stars Olivia Munn, Boyd Holbrook, Thomas Jane, Trevante Rhodes, Jacob Tremblay and, as announced last week, stunt performer Kyle Strauts as The Predator himself. Though still not officially confirmed, James Franco has long been rumoured to be playing lead character, Quinn McKenna. 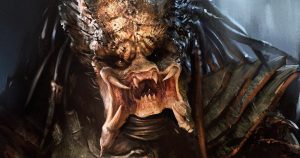 Also rumoured is the appearance of a 10-foot tall Predator, and a suburban setting for the story. Probably shouldn’t put too much faith in these whispers for the time being, however.

Twentieth Century Fox will unleash The Predator on February 9th, 2018.