SHADOWS IN THE MIST: Book Review

What better mix than Nazis and the occult? Not much in the horror fiction world, in my opinion. The story takes place in the dense, mist enshrouded and unforgiving terrain of the Hürtgen Forest just inside the German border.  This forest was nicknamed the meat grinder by those who fought there. Allied forces are pushing forward and an elite team is assembled to assault the border town of Reichskuhl. When they get there, the town is seemingly abandoned with not one German soldier defending it. Seemingly…

When Himmler saw the war was not going well and the Allies were pushing into Germany, his occult division worked feverishly to create a last line of defense – unstoppable, inhuman supersoldiers. Kudos to the author for not making them zombies!

The story is mostly set during World War II, but does switch to the present to describe the quest of Sean, an Air Force pilot, to return his grandfather’s tell-all diary to the military. The recounting of the tale from World War II was more engaging than the brief modern-day narrative.

The atmosphere is palpable. The forest and the mist are like characters themselves, and the desperation and fatigue of the soldiers comes across vividly. The sense of isolation and panic is present throughout, as the odds of survival decrease ever further. The characters are well written and engaging, especially Jack Chambers and Rabbi Goldstein. The colorful characters of Chamber’s ‘Lucky Seven’ and the X-2 special forces are teamed up together to take Reichskuhl. All of them are pushed to the limit by the stress of the situation, a seemingly relentless and unstoppable enemy, and seeing their comrades fall. In the desperate fight for survival, the soldiers’ personalities come to the fore. Some dig deep to carry on, and others crumble. The arrival of Anna, a rescued Jewish prisoner, is a welcome break from the entirely male cast of characters. 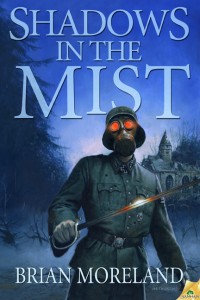 The plot moves along at a fair pace, with the Nazis a looming presence, as the Allies try to piece together who and what they are fighting, and moreover, how to stop an enemy that bullets have no effect on. The Nazi super-soldiers are fantastic, conjuring up a real sense of dread, with glowing eyes behind gas masks. It’s an iconic image, like having a recognizable villain in a slasher movie. The Nazis bring to mind a comparison with the killer from My Bloody Valentine. When they do get their hands on someone, much delicious gore ensures. As the book nears its conclusion and explanations for the Nazis, the author gets into the mysticism of runes, Jewish folklore and the Masonic Order. I’ll admit that gets long-winded and he lost me a bit.

The conclusion brings a mighty showdown and there was an enjoyable twist leading up to it that I hadn’t been expecting.  Overall, Shadows in The Mist was a good read. There is more of an emphasis on the military aspects than the horror, but that worked well in this case. I’d put it down as military fiction/horror fiction, rather than vice versa.