Under The Shadow Nabs 2 BAFTA Nominations

The BAFTA nominations were announced yesterday (10th January), with La La Land, Arrival and Nocturnal Animals scooping the most nominations, but we’re most interested in Under The Shadow’s nods. 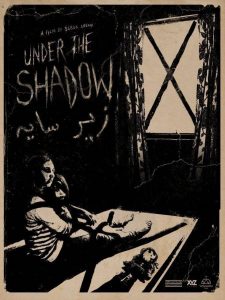 The British-Iranian supernatural horror secured nominations for Outstanding British Film and Outstanding Debut by a British Writer, Director or Producer. The film has some tough competition with I, Daniel Blake, American Honey, The Girl with all the Gifts and Notes on Blindness, nominated within these categories, too. However, we’re feeling confident that director Babak Anvari and co. can, at least, secure a win in the Outstanding Debut category.

Under The Shadow is a striking, beautiful and chilling addition to the horror genre that has put Anvari on the map as one of the most interesting genre directors of the moment. His direction, coupled with brilliant performances from Nagres Rashidi and the young Avin Manshadi, helped to craft Under The Shadow’s unpredictable and thoughtful horror experience.

You can watch Under The Shadow on Netflix now and you can read our 4-star review of the film right here.