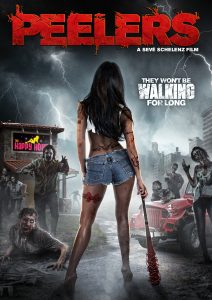 Following a successful tour on the international festival circuit, visiting the likes of Sitges Film Festival and Shriekfest, Sevé Schelenz’ sophomore feature, the gooey, gory midnight flick, Peelers, is all set to wreak havoc on VOD this month.

Penned by Lisa DeVita and starring Wren Walker, Caz Odin Darko and Madison J. Loos, Peelers follows former baseball player Blue Jean Douglas as she closes down her small-town strip club in preparation to leave for good. Her plans don’t quite go as expected when a group of infected coal miners turn up, forcing her to defend her bar, her strippers and her life from the Hell that breaks loose.

To celebrate the film’s release, SCREAM’s Howard Gorman caught up with Sevé Schelenz and Lisa DeVita to talk about avoiding “gratuitous nudity for the sake of gratuitous nudity” and how Lisa’s love for all things action and gore had Sevé tapping into his lovey dovey instincts….

SCREAM: Sevé, how did you get into filmmaking? You cut your teeth doing pretty much everything related to the movie business.

Sevé: It’s been something I’ve enjoyed since I was a kid. I’ve just always made little films and I begged my parents to buy me a VHS camera back then. They were large, very clunky and very expensive and that was the one Christmas gift that I got. And after that, I just started grabbing all my friends and started making films. But I think I maybe drove everyone a bit crazy because I kept using them all over and over and over again and all I talked about were the shots and trying to figure stuff out. From just shooting and watching movies as a kid, I learned angles and editing. I used 2 VCRs to edit and it was just kind of a passion. And then, when University was coming up, I had to make a decision in high school and I didn’t really know there was such a thing as to work in film. But my careers adviser finally told me that there was a career in film so I got my degree and went to Vancouver where I worked as a dubber. That wasn’t too inspiring but then I moved to the edit suite which was a little more inspiring. Finally, I realised you just have to do it yourself and you can’t really rely on anyone else. You make your own future so I wrote a feature film called Skew and I just went and shot it. I learned so much when I directed that and I put that education to use for the film I have now which is Peelers.

SCREAM: Talking of Skew, I understand you’ve written scripts in various realms but your Skew producers convinced you to stick with horror for your second film although, when they said they wanted as much blood and as many breasts as possible, you weren’t overly convinced at first.

Sevé: That’s right. Comedy is kind of my thing and Skew just came to me during a road trip. I made that and had a lot of fun and my sales agent asked me what I wanted to do next. I asked him what would sell best and he told me, “Boobs and blood.” And I just didn’t want any gratuitous nudity in there. I have nothing against nudity but I need it to be in the right place. I’m all about story so I went away and started thinking about the environment for a horror movie where we could see lots of boobs and where that’s accepted. The first thing that came to mind was a strip club and then I approached Lisa, the writer, and she had actually lived in Las Vegas at one point. She told me a story about a time she had gone to a strip club once just to enjoy her evening and a fight broke out. There was a lot of screaming and she was a little bit inebriated and she didn’t really know quite what was happening. Next thing you know, there were bottles flying about and someone grabbed her and pulled her under the table and she whacked her head. 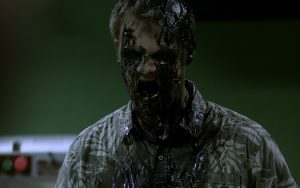 Lisa: Yeah. I remember thinking, through all the haze and the craziness, “Where did all the strippers go?” And I just thought it would be cool having the strippers in there kicking asses instead of the cops. I saw a story stewing there and that’s sort of where the script came from.

Séve: We were fed up of having strippers portrayed as ditzy women and we focused on creating a kick ass woman for Peelers.

Lisa: And then Sevé kind of gave me free reign to do it but at the same time reeled me in because I took it to some pretty crazy places. (laughs) But when it came to shooting, I definitely prefer to be more behind the scenes and more of an observer. Sevé’s much more the social guy who likes to party whilst I’m the one who likes to sit and watch everything from afar.

Sevé: Just as a side note, something funny with us is that Lisa is the one that wants the blood, the gore, the comedy and the action but she knows NOTHING about romance. I was like, “Where’s the love, Lisa?” So I actually wrote more of the lovey dovey stuff whilst she stuck with the action.

Lisa: I struggled so much with the love stuff. Every time I wrote it, I’d show Sevé and he’d keep sending me back and back until he ended up doing it himself. (laughs)

Sevé: I have to add to that that Kirsty Peters, who plays Licorice in the film; she read a scene at the end involving two other characters where something happens and there’s some lovey dovey stuff, and there might be a death involved. She said that she was crying when she read that and I said, “That’s the part that I wrote!!!”

SCREAM: Despite having come up with a premise that justified having nudity in the film, when it came to auditioning, you were still a bit concerned just because the film involved nudity.

Sevé: I was worried, but we had a couple of tricks on our side. Firstly, I had done Skew so I already had one film under my belt. Secondly, I have my iMDb credits with all my colouring credits so people considering auditioning researched me and researched the company and saw there were plenty of productions under our belt so it all looked very reputable. And then, when the people arrived for the auditions, we used a facility that had worked on bigger films so we had all kinds of posters of bigger films around so it all looked very professional. I also went out of our way to make sure we had a female receptionist. We also had a female in the room when we were auditioning so it wasn’t just four guys checking out the actresses, you know? It was a matter of building a trust between the actresses and myself. And then, when I cast them, I met with them and we had a drink and wanted to make sure they were all going to be comfortable knowing that I was going to be on set with them whilst they were nude in certain scenes. To me, obviously, the nudity is secondary and what I really wanted was a performance out of each performer. You’ll have to ask the actresses, but I think they all had a really good time during the shoot and they’ve all come to me and asked to be in a sequel, although I don’t think that’s something that we could do, given what happens to the characters.

SCREAM: For a low budget horror movie, Keir Vichert really pulled out all the stops with the effects.

Sevé: Kier is an amazing guy. He was a friend of a friend and I called him just when he was about to take three months off to relax. I sent him the script and he called me up right away. He was jumping through the phone at the chance to work on it. Of all the department heads, he was probably the one I met with the longest. I am very anal when it comes to making sure everything is done right and he was right there with me. And Kier had such great ideas and would go off and find the best way to create everything I was after. He would also go off and huff and puff every time the visual effects team showed up because he wanted everything to be practical.

SCREAM: Were most of the effects on the page before Keir came in? Was it a challenge to write that part of the script? 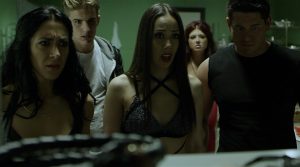 Lisa: I actually loved doing that. This was my first foray into horror as I’m more used to writing comedy. I had a blast writing the scenes that involved the effects and I came up with some really crazy kills. There were a lot of those but many got cut because I brought them to Sevé and he’d be like, “We can’t do this! This would be like a 1.5 million dollar shot.” So I had to go back to the drawing board but it made me write from more of a producer’s perspective as I had to take the budget into mind and think what we could pull off with the money we had.

SCREAM: We talked about how you’re thing is more comedy and that you’ve got various different types of scripts either completed or on the go. What’s next for you? I think you’ve completed the first book for a sci-fi trilogy too.

Sevé: A lot of that is on Lisa actually, mainly because I’ve been doing all the producing and directing stuff. I’m not with her on everything but, because we work so well together, I often ask her what else she has. That book you mention is a sci-fi trilogy and that’s the first book in that series. It’s just a rough draft right now but that was inspired from seeing movies like Twilight and Harry Potter and she felt she could do something like that but give it more of an adult feel.

Aside from that, we have a script for a family picture that’s done and ready to shoot. It’s actually a talking dog film and whilst that idea might put people off, we wrote it specifically to make sure adults will get just as much out of it as the kids. There’s also a road trip comedy that Lisa’s working on and also a horror film but, as we don’t have any financing, although we could shoot all of these films soon, that soon could be three years from now.

We’d like to thank Sevé and Lisa for talking to SCREAM and we urge you to catch PEELERS which is available now on VOD.