Serpent Slinks on to DVD this October

You may remember that we introduced you to Serpent a few months ago with a very snakelike poster. Which is fitting, because the film is about a serpent. It sounds like a pretty terrifying film because it follows a couple whose camping trip turns into a nightmare when they become trapped inside their tent with a poisonous snake.

We’ve seen plenty of horror movies about camping trips turning into hell, but nothing like this. If the film can deliver intense scares in its small space, but also manage to keep up a good pace and be genuinely exciting, Serpent could be one of the most fun and freaky horror films of the year. 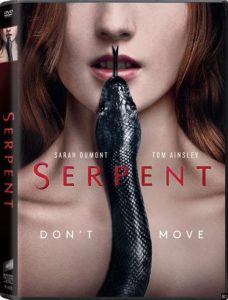 When Adam’s grant is approved to research a rare species of South African beetle, his wife Gwen convinces him to bring her along in an effort to repair their rocky relationship and assuage her own secret guilt. Upon reaching the lush, forebodingly-named Suicide Gorge, Adam and Gwen settle in and set up camp. When their slumber is disturbed by the gut-wrenching revelation that a venomous Black Mamba is zipped inside the tent with them, the couple discovers that the harrowing physical threat they face is equally matched by a rapidly spiralling, dark and dangerous psychological showdown.

Scouts Guide to the Zombie Apocalypse’s Sarah Dumont and Tom Ainsley (TV’s The Royals) star in Serpent, which was written and directed by feature first-timer Amanda Evans, and will be released on DVD and Digital HD on 31st October 2017.