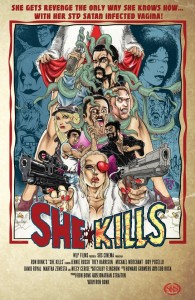 This is a film that is definitely not going to be to everyone’s tastes, but it definitely looks like something messed-up and absolutely insane, so most of you will probably enjoy it.

The official trailer for the madness that is She Kills has landed, and we think it might just leave you completely dumb-founded, but in a good way. This is the story of what happens when Satan claims your genitals, and we can warn you that it’s very sNSFW, extremely bloody and with a lot of nudity!

Synopsis:
Sadie’s life is transformed into a horrific one after a vindictive and evil gang called The Touchers brutally attacks her and her husband on their wedding night. During the attack, Sadie discovers her vagina has been claimed by Satan himself, leaving her with the legendary curse called Fire Crotch. After an unsuccessful attempt at a space exorcism from her fortuneteller best friend, the powers inside Sadie grow. Sadie vows to use her lethal lady garden to seek revenge on the gang that destroyed her life.