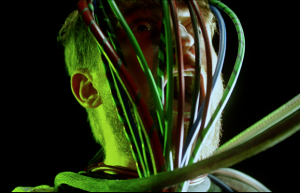 Graham Skipper, who starred in last year’s Beyond the Gates, turns his hand to writing and directing for the new mind-bending science fiction/horror thriller Sequence Break. This twisted, goo-ridden offering isn’t shy about showing homage to obviously influential filmmakers and movies, but it offers plenty of originality and heart in delivering a satisfying, bizzaro viewing experience.

Synopsis:
Oz (Chase Williamson, who also starred in Beyond the Gates) fixes older arcade games in a shop that will soon close down. He’s hyper-focused on his work, and his social skills are lacking somewhat, but he is well liked by his boss. A customer named Tess (Fabianne Therese of Starry Eyes) comes in one day, and the two begin an awkward walk down a genuinely cute and humorous romantic path. Meanwhile, a straggly stranger (John Dinan) begins making dangerous visits to the shop at night, and Oz becomes obsessed with a video game for which he received a mysterious circuit board.

The game threatens to take over Oz’s life, offering surreal scenes that call on both David Cronenberg and David Lynch in their trippiness as Oz melds with the machine. Joystick puns never breached what Skipper, Jason Richard Miller (visual effects), Neal Jonas (game animation), and the special effects team have dreamt up for Sequence Break. The effects are outstanding and an absolute blast to watch unfold. Williamson’s performance takes things to a higher plane, though, as he fearlessly dives into displaying his character’s technical ecstasy. 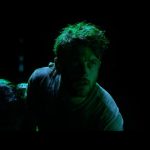 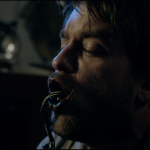 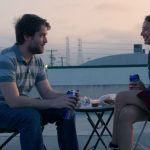 Though rich with mesmerising visuals and a moody, brooding atmosphere, Sequence Break offers its share of food for thought to go along with its mise-en-scéne. There’s plenty to chew on here philosophically, including modern-day society’s foregoing actual reality for ever-deeper immersion into virtual ones. Skipper masterfully balances this aspect of the film with characters who feel real, and who happen to have a seemingly difficult time connecting with a humanity for which they yearn. Along with Williamson’s impressive turn, Therese is terrific as the quirkily charming Tess, who does her best to motivate Oz into realising his dreams and potential.

Van Hughes’ sensational synthesiser score captures both a modern feel and a throwback sense of the 1980s, making it a perfect match for Skipper’s vision of an equally current and nostalgic world. Brian Sowell’s cinematography is remarkable throughout.

Sequence Break combines a taut screenplay, sympathetic characters with whom viewers can feel engaged, outstanding performances, confident direction, jaw-dropping visuals, and enough heart to make certain that the film isn’t merely a philosophical head trip. It seems to be a film that will unlock new mysteries and rewards with repeat viewings.