Set before the events that unravelled in 2016’s masterful Train to Busan, Seoul Station is an animated action-horror that follows various survivors as they fight to survive during a zombie outbreak in South Korea. 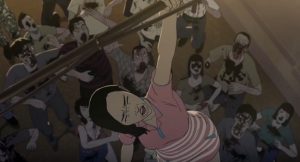 If you wanted to see the beginning of the zombie outbreak that rages during the intense and nail-biting Train to Busan, then you may be disappointed in Seoul Station’s lack of any real explanation. An elderly man limps down a bust street – sadly going unnoticed by most of those around him – and minutes later there are hundreds of the undead running the streets of Seoul. The film’s events could, therefore, be taking place parallel to the time of Train to Busan. This was disappointing, as I personally, was keen to see why the outbreak and happened and not where, as Seoul Station appears to do.

Aside from this, Seoul Station is an almost perfect zombie thriller and offers another action-packed and gruesome Korean zombie ride. It may not have an equal amount of emotional intensity as Train to Busan, but it certainly has a similar level of non-relenting and nail-biting action sequences. For that reason, Seoul Station is a superb addition to the zombie genre that proves that Sang-ho Yeon is a master at crafting both live-action and animated heart-stopping horror.

Whereas Train to Busan’s primal focus was on the importance of family, with the film’s central character fighting to protect his young daughter, Seoul Station opts for a more socially-driven story. The undead are, at first, feared to be a group of angry homeless people residing in the station; where their ferocious intentions are considered to be extensions of their already dwindling sanity and constant rage at their living situation. The film is awash with dark greys and shadows, emphasising the darkness that is residing in the film as a whole, but also unmasks the real dark heart of this South Korean city. 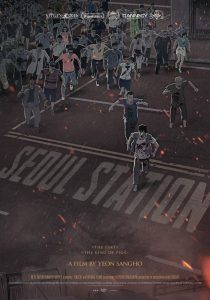 This streak of cynicism is extended to the characters, who are all juggling issues of their own. The survivors are regular people like you and I. They’re not ex-military badasses equipped with guns and grenades. There is a determination to focus on reality with Seoul Station which is admirable, easily engulfing the audience in a story where the characters and the setting are both reflections of recognisable life.

It may not have you crying by the end, but Seoul Station’s social commentary is quietly heart-breaking as it hides behind violent, gory and overtly entertaining zombie drama. As with all important features about a zombie apocalypse, Seoul Station’s zombies are a reflection of a city that is one of the most technologically-advanced and globally influential, but is bursting with issues that are close to home for a lot of people. These zombie are flesh-eating metaphors for what happens when the problems escalate, literally running rife into the lives of those who were previously unaffected.

As well as this easily recognisable comment on the underlying poor state of Seoul. Seoul Station is packed with heart-stopping action set pieces that will later work as inspiration for Train to Busan. As with its sequel, Seoul Station’s zombies are, perhaps even more so, aggressive and relentless creatures that appear in unstoppable hoards. Animation is a perfect tool for this film to unleash impressively possible scenes that show them falling in down staircases, crashing through glass windows, charging through barricades and literally throwing themselves off buildings to reach their living victims. The tension is effortless as our human heroes jump across roofs and manoeuvre along electrical wires while the zombie threat remains steady below.

Seoul Station is effortlessly entertaining and a remarkable example of a film that blends fantastical horror excitement with a keenness to explore realistic issues. The combination of gruesome zombie action and emotive drama secures Seoul Station as a breath-taking, gripping and furiously exciting thrill-ride. A must-see? Yes. 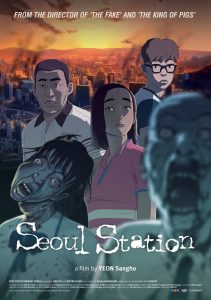 Special Features:
The sole feature is a ‘Making Of’ which is an insightful and extensive look behind-the-scenes of Seoul Station and explores director Sang-ho Yeon’s inspirations for the film and his drive to bring an expressive and realistic story to the forefront. There is also a look into the voice actors working backstage where they discuss their experience on Seoul Station and how dubbing for animations can improve their acting in live-action films. It’s an in-depth Making Of that also shows the film’s original storyboards, where real life influenced the setting and characters within Seoul Station.