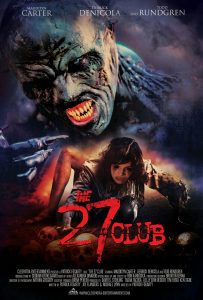 Jimi Hendrix. Janis Joplin. Kurt Cobain. Amy Winehouse. With so many legendary performers dying at the age of 27, the theories around the so-called “27 Club” are certainly creepy. And according to Cleopatra Entertainment’s new rock and roll horror thriller The 27 Club, some of the theories might just be true…

Directed by Patrick Fogarty and written by Forgarty, Joe Flanders, and Michael Lynn, The 27 Club follows an aspiring singer and journalism student whose quest to get to the bottom of the mystery takes them to unspeakable places.

Is eternal fame worth the price of the artist’s soul? You can find out on April 23rd, when The 27 Club premieres worldwide on all VOD platforms. A limited-edition Blu-ray/DVD release complete with the soundtrack will be available from June 11th. Check out the trailer below, and rock on.