Selene is Back in an Underworld: Blood Wars Poster

Underworld: Blood Wars is preparing for battle in January and a new poster has been unveiled to show that Selene (Kate Beckinsale) is ready for the imminent war. From the look of the poster, things are going to get seriously chilly. Tis the season, after all. 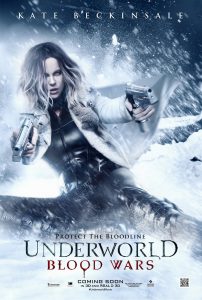 Synopsis:
Vampire death dealer, Selene fights to end the eternal war between the Lycan clan and the Vampire faction that betrayed her.

Underworld: Blood Wars will be directed by Anna Foerster, who is also directing Source Code 2 and Secret Hunter. She has previously directed episodes of TV programs Outlander, Madam Secretary and Criminal Minds, so we are keen to see how she fares with her first taste of feature film directing.

Underworld: Blood Wars additionally stars Theo James, Charles Dance, Alicia Vela-Bailey, Lara Pulver and Bradley James. It will be released on 6th January in the USA. It is set to be unleashed in the UK on Friday 13th January 2017, which may be unlucky for some, but hopefully not for this franchise.