I have not read a lot by Jason Parent, just his stories as part of the mighty crew that gave us the collections, Dead Roses: Five Dark Tales of Twisted Love and Bad Apples: Five Slices of Halloween Horror. I have known him for a while now and have to say he is a decent bloke. I admit to that solely for the purposes of this review. I want it made quite clear that even though I do know him, he is also quite clear that garners no favours when I review books. He knows that I am honest about what I read, no matter who wrote it.

To that end I have to say I was hugely disappointed with what I read in Seeing Evil. Read on and I will tell you why.

Synopsis:
Sam Reilly is a detective in the Major Crimes Division. She isn’t exactly orthodox and has a bit of a reputation as being somewhat of a maverick. She is sent to a gruesome murder/suicide where she comes across a small child sitting on the floor in the middle of a pool of blood. His family has been killed in the crime.

The child was Michael Turcotte. 11 years later, he has been in and out of various foster homes, struggling with growing up in a system that sometimes doesn’t care. His only true friend is Sam. She has stuck by him during the years since his family was murdered.

Michael has a secret. It’s so secret he has just discovered it himself. He has visions. Visions of things that are going to happen to anyone that he touches, flesh to flesh. He truly sees evil. When he tells people and Sam about his first vision, they don’t believe him. When it comes true and someone dies, Sam starts to listen to anything Michael tells her.

Tessa Masterton also has a secret. A secret life that no one but her and her father know about. She has heard about Michael’s visions and approaches him to see if he can tell her what her future holds. What Michael sees is something he cannot possibly tell Tessa. He tells Sam though.

What unfolds is a race against time, a race against evil and a race to stop a cold and ruthless killer that won’t let anyone stand in his way. That includes Sam, Michael and Tessa.

So I said earlier I was hugely disappointed. I was. I was expecting the same sort of twisted horror that I had read from Mr Parent previously.

What I got instead was what I would best describe as a thriller. A thriller with a difference though. A thriller with a supernatural element to it. A thriller which was beautifully crafted into a story that will delight both thriller lovers and horror lovers alike. So, although I was disappointed that this wasn’t an out and out horror story, after finishing this book I have to say that if proof was ever needed that Jason Parent can write stuff other than twisted, horrific tales… this is it.

Characters wise there are a few in this tory but it mainly concentrates on Sam, Michael, Tessa and her father. Sam is brilliant. She is a cop who likes results. Sometimes she doesn’t use normal methods to get the results but you have to admire her for that. She’s a good cop and a good person and you can’t help but like her and root for her. Michael is a fourteen year old boy who has had a traumatic past that he isn’t even aware of. The visions scare him to the point where he doesn’t even want to touch people because he doesn’t want to have them. He soon learns to embrace the visions and use them to his advantage. Tessa was harder to figure out for me. She is mixed up in something that she has no control over. Or does she? I couldn’t help but think Mr Parent was leaving this character open to our own interpretation rather than telling us how to read her. Her father is just an absolute 100% (insert expletive here). A totally horrible individual for one hundred different reasons. I don’t want to tell you exactly what he is like because I would need to give away some of the plot.

When these characters all come together, they blend together so well. Their paths cross for most of the book and they all fit their individual roles perfectly.

In terms of the plot? It’s been done before. Killer on the loose. Someone with a gift can see what’s going to happen next. Cops chase bad guy, get him and everyone lives happily ever after. Jason Parent has added something different to this story to keep you glued to it. I like to call it  ”haven’t got a clue where the hell this story is going to end up-itis”.

You sort of know what is going to happen but you cannot in any way shape or form predict how it is going to get there. The plot changes directions more times than me listening to a Chinese speaking sat nav. You think you have it figured out. You think you know exactly what will happen next. In reality you have no idea. This is what makes this book for me. The unpredictability of it.

I was kind of surprised by this book to be honest. Like I said before, I was expecting the twisted horror story. When I realised I wasn’t going to get that, I switched mood to fit with the book and I have to say in terms of the thrillers I have read this year, it is up there with the best.

The pace is perfect. Fast and free flowing from start to finish. There are only one or two parts where you can sit back and catch your breath before it hits the gas and takes off again. It is very easy to read. No big complicated sub plots. No long drawn out sections where you spend unnecessary time learning about the characters past lives that won’t add to the story. It doesn’t need any of this. It has all it needs to keep you glued to the pages and give you the adrenaline rush that a thriller should but, sadly, a lot lack. Also, giving the fact there is the supernatural aspect of Michael’s visions, it is believable. You don’t read it thinking “yeah right that would never happen”. You believe every word of it. Obviously there are murders. Obviously there is blood. Obviously there is one particular murder that I really want to tell you not to read about while you are eating.

Jason Parent has an undeniable talent for writing. I love his style. It’s laid back but one hundred miles per hour at the same time. It’s uncomplicated, making the words just flow across the page. It’s good fun. 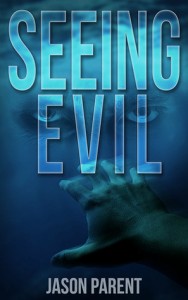 To summarise: a thriller with a supernatural twist. Superbly fast paced from beginning to end meaning you will not want to put it down. A plot that will keep you guessing to the very end but not in a confusing way. Brilliant characters that gel together perfectly. A bloody good book. Even though it’s not a horror.

I would say there is scope for a continuation of this story. I really hope he does that. I think this could lead to a very successful series for him.