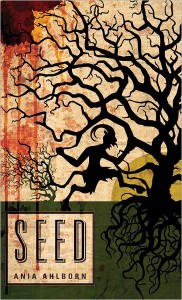 Seed by Ania Ahlborn has been patiently sitting on my kindle waiting to be remembered until recently I came across the audiobook and at just over 6 hours immediately thought, yep that’s easily doable in a day, perfect.

Seed is an almost perfect slow building horror, it plans and executes a clinical attack on your emotions as the screw gradually turns and the tension ratchets to unbearable levels. It all starts with a car crash, as the protagonist and driver of the car Jack, sees something at the side of the road, something rooted deeply in the terror of his childhood.

Things deteriorate from that moment on, youngest daughter Charlie takes on the child from hell persona of Damianesque proportion and this family is about to suffer nightmares that grip the reader as tightly as the most terrifying homicidal maniacs bear hug.

‘She knew there was only one way to get rid of the prickle that had burrowed into her heart: get up, stand over her sister again. Stand over her and wait until she stopped breathing.’

Seed was Ania Ahlborn’s debut novel and it really is a tremendous piece of work, it’s not long, the author seriously doesn’t beat about the bush and over describe, and I was heavily invested in the story, the characters and this family’s plight. So you couldn’t really ask for anything else and I’ll certainly be reading more from Ania Ahlborn.