Alexandre Aja is heading into the world of VR with his current venture, and he’s bringing Robert Englund with him. The director of Haute Tension, 2006’s The Hills Have Eyes remake and Piranha 3D is producing and directing Campfire Creepers, an immersive horror anthology series which features, in one episode, a guest appearance from Englund. Here we have the first couple of images of Englund’s character – known as The Skull Collector – one of which The Elm Street legend posted over on Twitter. 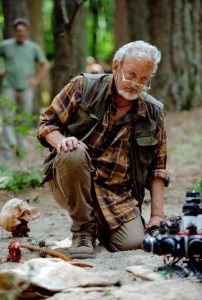 Campfire Creepers was co-created and scripted by Casey Cooper Johnson and Martin Andersen. The series…

“Invites the viewer to join the fire circle at Camp Coyote as a group of campers take turns telling scary stories, each one leading you on an immersive ride into your darkest childhood fears.”

Filming is currently underway, with the first batch of episodes to be released this coming Halloween, exclusive to the Oculus store.

Elsewhere, Aja is in pre-production on his sci-fi adventure Space Adventure Cobra, an adaptation of Buichi Terasawa’s Manga.