Check out this first still of Jane Levy in Don’t Breathe, which sees the actress once again teaming up with Evil Dead director Fede Alvarez for what could be one of the summer’s biggest horror films. The film, from Sony Screen Gems and Ghost House Pictures, follows a group of young ‘uns who break into a blind man’s home thinking they’ll get away with the perfect crime. It received rave reviews following its SXSW premiere last month.

Way ahead of its 26th August release Sony, clearly confident that they have something special, have been sneaking the film out with a few US screenings, creating some serious buzz. 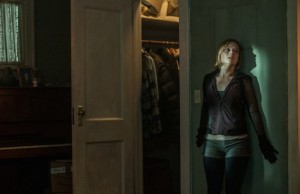 The official synopsis reads:
Three teens who get away with perfectly planned home robberies have set their sights on one last payout that will get them out of crime forever. Their target: a reclusive blind man with millions of dollars in hiding. But as soon as they break into his home, the tables are turned and they find themselves trapped and fighting for survival against a psychopath with secrets of his own.

Levy, who made her name in TV’s Suburgatory, is joined by Dylan Minnette (Let Me In, Goosebumps), It Follows’ Daniel Zovatto and Stephen Lang (Avatar, TV’s Salem) as The Blind Man. Don’t Breathe is produced by Sam Raimi and Rob Tapert for Ghost House, along with Joseph Drake, Nathan Kahane and J.R. Young.