Ukranian model/singer/entertainer Valeria Lukyanova – known as ‘The Human Barbie’ due to her resemblance to the famous doll, which she enhances with makeup and contact lenses – is playing to her unique strengths in her feature acting debut, starring as the titular character in The Doll. You can see her and her practised dead-eyed stare the film’s first trailer.

The creepy looking flick was directed by Susannah O’Brien, who currently has three other horror films in various stages of development, including the enticingly named Marijuana Massacre, as well as a documentary on Lukyanova. 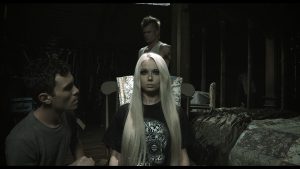 When Chris and Andy order a model from an escort service, they find that something is unnaturally wrong with Natasha — something deadly wrong. Little do they know that while Natasha is a breathtaking beauty, she’s really a possessed doll created by a mad doctor in an unholy laboratory, built with the urge to kill and dominate the minds of others so they will kill for her.