In the game of one-upmanship that sees increasingly silly premises become CGI-heavy, SyFy Channel monster movies, director Mike Mendez (The Convent, The Gravedancers) put himself in good stead with 2015’s ludicrously titled Lavalantula. Upping the ante at least in terms of its title is the follow-up, 2 Lava 2 Lantula, and we’ve got the trailer for you right here.

Mendez has passed the directorial reins over to Simon Basche for the sequel, which sees the return of Police Academy stars Steve Guttenberg, Michael Winslow and Marion Ramsey. Joining the cast this time around are Michele Weaver, Jimmy Bellinger, Erron Jay and RJ Walker. 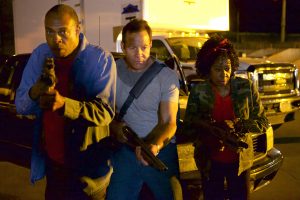 When an unprecedented amount of sinkholes erupt all over Florida, a new nest of fire spitting Lavalantulas is awakened… wreaking their fiery havoc all over the sunshine state. Adding to the mayhem, the arachnids have hit the beach where Colton West’s step-daughter, Raya, is taking a break from school. Now an A-list movie star, Colton walks off the set of his latest hundred million dollar blockbuster to save her. Armed with specialized weapons, Colton, his personal assistant, Kyle, and his best friend, Marty, race to save the residents of Florida from these hellish prehistoric beasts and taking on the biggest, baddest one of them all — Gargantulantula.

You can see just how absurd things will get this time when the film premieres on SyFy on August 6th. You’d be wise to expect plenty of preposterous goings on, not least of which is the notion that Steve Guttenberg is an A-list movie star.