Another day, another character poster for Rob Zombie’s 31. This week we’ve seen Richard Brake as Doom-Head and Lew Temple as Psycho-Head, and the latest poster showcases Malcolm McDowell’s Father Murder. Check it out below. 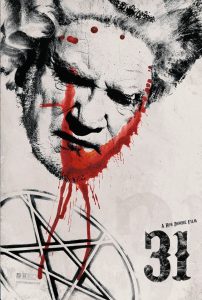 Father Murder is the sadistic orchestrator of the sick game of the film’s title, which sees six psychotic clowns hunting a group of kidnapped carnival workers in a compound known as ‘Murderworld’. The band of clowns is completed by Sex-Head (The Devil’s Rejects’ Elizabeth Daily), Death-Head (The Lords of Salem’s Torsten Voges), Schizo-Head (Breaking Bad’s David Ury) and Sick-Head (American Horror Story’s Pancho Moler). We can presumably expect to see each given their own poster over the coming week or so.

31 had its world premiere at Sundance back in January, and will bring its psychos and sadism to the UK when it premieres here at Horror Channel Frightfest in August. US audiences can see the film on VOD from 16th September, and at selected cinemas on October 21st.