A seductive and glamorous trailer for the mermaid horror The Lure has landed and it looks like it’s going to be one trippy experience. If you can imagine a film co-directed by Nicolas Winding Refn (The Neon Demon) and Julia Ducournau (Raw), you are well on the way to imagining the type of twisted comedy, dark subject matter and glorious visuals that The Lure is offering. 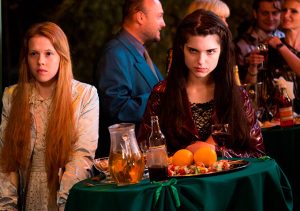 In Warsaw, a pair of mermaid sisters are adopted into a cabaret. While one seeks love with humans the other hungers to dine on the human population of the city.

The Lure is the directorial debut of Agnieszka Smoczynska and she has definitely exploded on to the film scene with a unique bang. The combination of cannibal horror and dark romance is extremely intriguing and when mixed with a splash of musical-drama, the trailer for The Lure is one of the most interesting we’ve ever seen. Just check it out below.

The Lure premiered at the Sundance Film Festival and received an overall positive reception. Its bold storyline and culmination of different genres secures it as a must-watch for those after something surprising in their horror films.

The Lure will be released on VOD on 1st February 2017.