Synopsis:
Albert Kench has just returned to Victorian London from Australia. He has been summonsed home after his sister Sally has been admitted to Oakbridge Asylum. When he visits her, he discovers she has become unrecognisable. She is near skeletal. She hasn’t spoken in over a year and she is missing an arm. He finds out she has been visited daily by an old childhood friend Rachel Darby.

Albert seeks out Rachel to try and find out what happened to his beloved sister. The story Rachel tells him is an unbelievable tale of a fraudulent spiritualist they went to visit at an exhibition and the evil Lord Aubrey Levi-Black who is an apparent master of the dark arts and seems to be in possession of a mirror that may be holding Sally’s very soul. Albert embarks on a crusade to free Sally from her glass prison but not everything he believes is true and not everyone he trusts is true either.

Jack Rollins. I have heard the name but never read anything by him. I grabbed this due to my recently discovered love of gothic tales and all things Victorian, in terms of horror. This developed after discovering William Hope Hodgson’s Carnacki tales. I have read a few gothic and Victorian tales since and there are some shockers out there with authors not being able to “get” the atmosphere of the Victorian times.

Finally, in Jack Rollins, I seem to have found someone who writes about this era just like Hodgson. The Séance is a fantastic tale. It totally grasps the way the higher born people of the time were sucked into the world of spirits and psychics. The problem was that most of these spiritualists were nothing more than fraudulent entertainers. Money was no object for the high born and these people knew that. Enter Lord Aubrey Levi-Black. This man was evil to his very core. He was no entertainer. He specialised in pure death.

The characters in this book are great. They are so perfectly made up for the times. Albert is a normal man of the times. Dashing and realistic about both the present and the future. Rachel appears to be a stunning woman intent on winning the charms of Albert. Lord Levi-Black is a rotter. A scoundrel, but a very dangerous scoundrel at that. 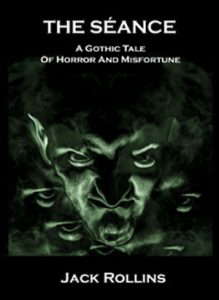 The descriptive writing makes it very easy to slip into the times. The clothes the people wear, the language they use and the settings and surroundings totally take you back in time, really making you believe you are living in the past. This makes the horror aspect of this book ten times more powerful. Albert doesn’t have the knowledge we have today about such things. He doesn’t have the backing of numerous people willing to help him in his quest. He doesn’t have the weapons or the know how to deal with what he is facing. Rather than making this unbelievable, it fills you with dread for him. This will creep you out big style. I use this analogy a lot with really good stories set in this time but this would have made a perfect script for a Hammer Horror film. Peter Cushing, Christopher Lee and Vincent Price would have had an absolute ball with this story.

This short story has again highlighted to me the British talent we have for writing wonderful books in the horror genre.

On Jack Rollins Twitter page he states this “I can give you nightmares simply by telling you stories!” I for one can vouch for that and I cannot wait to read more from this man.