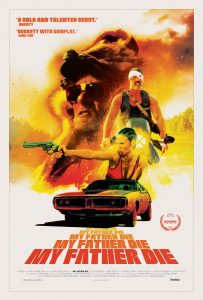 When it comes to Sean Brosnan’s Southern Gothic revenge tale My Father Die, first time directorial debuts don’t come much stronger than this. Rooted in “The Playboy of the Western World,” a play that has resonated with Brosnan since childhood, My Father Die serves up a primal, southern noir tale of family vengeance wrapped in a Greek tragedy’s clothes, with a Bayou setting that gives the film a certain freshness and rawness often missing in the cliché-ridden revenge flicks of late.

My Father Die follows Asher (Joe Anderson) who was physically and mentally scarred as a child at the hands of his brutal and barbaric father Ivan (Gary Stretch). Once released after serving a lengthy jail sentence for the murder of his elder son – who the young Asher idolised – Ivan heads home but hasn’t allowed for the effect his twenty years behind bars have had on Asher, who has spent the time of his father’s incarceration festering on thoughts of revenge for both his brother and himself.

With the film now available on Digital Download and heading to DVD and VOD this April 3rd, SCREAM caught up with Brosnan to pinpoint exactly what sparked his decision to adapt The Playboy of the Western World and how he makes art and beauty out of on-screen savagery…

SCREAM: What was it about adapting “The Playboy of the Western World” that you felt made this the best story to tell as a first time director?

Sean Brosnan: I wanted to tell a revenge film really and I read that play at boarding school when I was about fourteen. It just always struck a chord with me and I wanted to tell a story with almost mythological roots and larger than life. There was also a lot of room to just make it as brutal as possible – which I really wanted to explore.

SCREAM: Would you say you injected a lot of your classical training into the story? At times it feels like a Shakespearian tragedy.

Absolutely. I tried to find lyricism in the darkness. Even if things were hard subjects or hard scenes to tackle, I just tried to find poetry in it and to make an ugly thing slightly beautiful.

SCREAM: The event that triggers Joe Anderson’s character’s revenge in the movie happens to him when he’s about to hit his teens. Is that just a coincidence that that was about the same age that you started attending boarding school and you found yourself having to adapt drastically to that new situation?

SCREAM: The location is very much a character in its own right.

We shot it all in Louisiana and basically got by on the skin of our teeth. We shot it in thirteen days and there was no time for rehearsal or anything like that. It was literally run and gun. The location had everything we needed right there. The bayou down on the river is just gorgeous and I wanted to create a nasty and nefarious story shot and told very beautifully. But there were some sacrifices we had to make in order to make that happen which was basically just not having the luxury of having more than three takes.

SCREAM: Tell me about casting Joe Anderson and Gary Stretch as the protagonist and antagonist, respectively.

Joe has such intensity and such a visceral physicality. He just such a livewire. I’d seen pretty much his entire body of work and he just nailed that kind of insalubrious redneck (laughs), even though he’s English. I just thought that, for this, he is so emotive with just his eyes, and his intention comes across without him having to say anything and that’s exactly what I needed for the character. It takes a really strong actor to be able to do that and Joe was incredible.

And Gary is such an amazing and lovable human being and with My Father Die I just wanted to really highlight the amazing look that he has. I could watch Gary just staring at a fly for hours and it would just be so interesting. He has an amazing face of a pugilist, just pummelled and weathered. He just showed up and attacked this role with such voracity that it made every one else pick their game up. He was a legend. 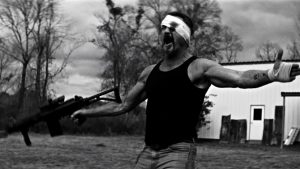 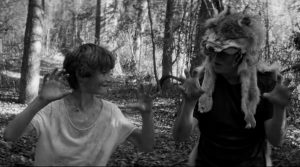 SCREAM: Given the “insalubrious” characters we see in the film, I’m guessing that slant came from a desire to paint a very different revenge picture than we’ve seen before.

I guess. I think certain clichés are clichés because that’s the way life is sometimes. But I think that when I was creating this, I had a very specific thing and I just wanted to make the characters as detestable or as lovable as I could.

SCREAM: Tell me a little about your father’s (Pierce Brosnan) involvement as a producer.

He came on board as a producer because originally Billy Bob Thornton was going to narrate the movie. Pierce is good friends with Billy Bob and he sent him the script and he was going to do it but then, when we got to the editing room, it just didn’t make a lot of sense. We realised that it made perfect sense to have the little boy narrating and that’s the last time we hear his voice so it was certainly awkward telling Billy Bob he wasn’t doing it (laughs). But that was how Pierce came on as producer at first but then he certainly helped in many other ways in post-production.

SCREAM: The roots/rock score adds so much to the film’s setting. How did you cross paths with composers Ohad Benchetrit and Justin Small?

I had never met them and I discovered them when a friend of mine played me some of their music. They were doing some documentary work at the time. They were the first people to come on board the project from the inception of the script. They came on and started writing music from the very beginning. I sent over a lot of example tracks and we worked for a long time shaping the score.

SCREAM: You’re about to shoot a psychological thriller soon. Can you shed a bit of light on that project?

That’s right. I’m shooting that now and it’s about a famous painter who has a heroin addiction and it’s a very intense trip. He goes off to take a form of Ayahuasca, and he’s told not to leave the circle but he does and brings back a certain entity with him and he then goes on a full on rampage…

We’d like to thank Sean for talking to SCREAM and we’ll leave you with a trailer for My Father Die, which is available now on Digital Download followed by a DVD and VOD release this April 3rd.