Those good folk at Arrow Video continue to surprise with the illicit, underground gems they pick for restoration. While Arrow are yet to make the announcement themselves, cult filmmaker Jim Van Bebber (The Manson Family, My Sweet Satan) has written on Facebook that they will be releasing his 1988 feature debut Deadbeat at Dawn. The film will make its Blu-ray debut next year, in time for its 30th anniversary.

Van Bebber wrote: “Very pleased to announce that Deadbeat at Dawn has found its new home with the impeccable Arrow Films, slated for a 4K transfer from the original A&B rolls (supervised by me) and a long overdue Bluray release on it’s 30th anniversary.”

A relentlessly violent and scuzzy action film packed with decapitations, throat slashings, car violence and Kung Fu, Deadbeat at Dawn truly is one of those ‘holy grail’ flicks for fans of underground ‘80s exploitation. The film was in many ways a calling card for Van Bebber, who wrote, directed and edited the film as well as leading the cast. He plays Goose, the leader of gang the Ravens, who decides on one last drug deal before settling down with his psychic girlfriend. When she is clubbed to death by rival gang the Spiders, Goose hides out with his psycho junkie father and plots his bloody revenge. 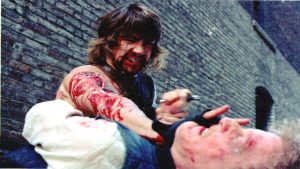 Until Arrow confirm the release, it is unclear whether it will be a US only disc. A UK release would be something particularly special however, with the film having never previously received a certificate from the BBFC.