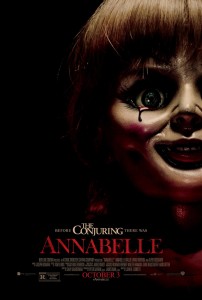 It was definitely not on the same level as The Conjuring, but Annabelle smashed the box office back in 2014 and a sequel was soon put in to motion. Writer of the first film Gary Dauberman has now signed up to be the scribe for the upcoming sequel. John R. Leonetti, however, will not be returning to helm Annabelle 2, so that leaves the director role up for grabs. Anyone interested?

The overall details for the film are sparse at the moment, but James Wan will be producing. He is currently working on The Conjuring 2: The Enfield Poltergeist which will hit cinemas in 2016, so that suggests Annabelle 2 will be released in 2017. Far from a bad film, Annabelle lacked the finesse and atmospherics that made The Conjuring so effective. Hopefully it will also up the scares as the first was a little disappointing in that department.

Keep your eyes peeled for news on the director, who do you think it should be?