More casting news fresh out of Shudder’s Creepshow TV series! David Arquette, best known for playing Deputy Dewey in the Scream franchise, will star in the episode “Times is Tough in Musky Holler.” Directed by John Harrison (who worked on Romero’s 1982 Creepshow and composed the score), the episode will see the former leaders of a town they controlled through fear getting a taste of their own medicine.

Other new additions to the cast include Tricia Helfer (Lucifer, Battlestar Galactica) and Dana Gould (Stan Against Evil, The Simpsons). Helfer will star in “Lydia Layne’s Better Half,” directed by Roxanna Benjamin (Body at Brighton Rock), which follows a powerful woman who denies a promotion to her protégée and lover, with dramatic consequences. Gould is starring in “Skincrawlers,” also directed by Benjamin, which revolves around a miraculous new weight loss treatment that comes with unexpected complications. 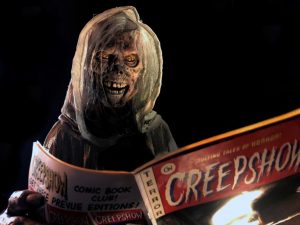 These actors join the previously announced Adrienne Barbeau (Escape from New York, The Fog), Tobin Bell (the Saw franchise), and Giancarlo Esposito (Breaking Bad). All in all, the series is shaping up to have a phenomenal cast, with more talented writers and directors on board than we can list here—not to mention creature and make-up effects by Greg Nicotero’s KNB EFX Group.

Creepshow’s first season will feature twelve segments over six episodes and will premiere on the Shudder streaming service later this year.