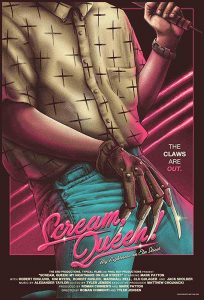 After making waves on the festival circuit last year, Scream, Queen! My Nightmare on Elm Street is coming home. The superb documentary has just been acquired by Virgil Films and will be released on DVD and Digital in March 2020.

From directors Roman Chimienti and Tyler Jensen, Scream, Queen! follows Mark Patton, star of A Nightmare on Elm Street 2: Freddy’s Revenge, as he grapples with the film’s legacy and his own experience as horror’s first male “scream queen.” Named LGBTQ documentary of the year by the Society of LGBTQ Entertainment Critics for its 2020 Dorian Awards, the doc is essential watching for queer horror fans, fans of the NoES franchise, and anyone looking for a powerful, triumphant watch.

Read our review out of Fantastic Fest here—and get ready to slay.