If an inventive blend of Cabin In The Woods and Independence Day sounds right up your street then you’ve come to the right place. Directed with real visual flair by Mauro Borelli (concept artist behind blockbusters ranging from Pirates of the Caribbean: At World’s End right through to The Hateful Eight), said helmer’s debut sci-fi thriller The Recall is a thrillingly unpredictable, full-throttle, and most importantly, fun take on the alien abduction genre featuring genuinely creepy creatures and dazzling effects, a committed young cast. And to top it all off, Wesley Snipes clearly had one hell of good time playing a no-nonsense survivalist trying to stop aliens from taking over planet Earth, and attempting to convince a cabin full of teens what’s really at stake.

Following a successful run of theatrical screenings with the Barco Escape panoramic format, the film is now all set to bow in select theaters in 2D and on VOD platforms this June 16. To celebrate the impending release we caught up with one of the film’s young stars, R.J. Mitte, to extract as much information about the imminent alien attack from him as was humanly possible.

SCREAM: Before we actually chat about your latest role in The Recall, I wanted to ask what kind of criteria you chose when it came to picking and choosing roles after the success of Breaking Bad. Did you feel the need to break away from being type cast after playing Flynn for so many years?

R.J. Mitte: As you’ll have seen, all of the characters I’ve played since haven’t been anything like my character in Breaking Bad, even though I did get quite a few offers towards that kind of thing. You’ve just got to let sleeping dogs lie. I did my best with that job and had fun doing it and once I’d put my nail in that coffin, it was just time to move on with the next thing. I don’t think you should ever do the same job twice; especially if you want to evolve as an actor. It’s a challenge because there are a lot of great projects out there that are disability related and have big budgets that wanted me to get involved but I felt that they were going towards me because I have a name with notoriety, but at the same time, they were hiring the wrong person with the wrong disabilities to do the wrong job.

SCREAM: A while back you said, “Disability is still too often seen as a liability when it should be seen an asset.” I’m assuming you’re still of the same opinion now?

100%. I think it’s going to be like that for a long time. In a company or from a corporation’s standpoint, disability sounds like liability and that’s something that we have to evolve from and we have to move past. In everyone’s weakness there is a strength and we just have to find it, but that will take time. I think that’s just a part of life and a part of growing and we have to evolve.

I’m also as conscious as I can be about the kinds of roles that I pick so that they don’t diminish my value and my team’s value. We’re always very conscientious of our actions and how they play into the grand scheme of our business and that’s just part of this industry: Making sure that we’re not watering down or diminishing our potential. Sure, I have a good niche with the disability market, but why use that? That’s such a small part of what I am and I’d rather use that for when things are important and for things that I feel passionate about.

SCREAM: So what was it about The Recall that felt like the next best step to take in your career?

Well, the director Mauro (Borrelli) and a few other people contacted me and when they told me about the VR and Barco Escape format, I got really excited because I really wanted to understand that more, and that was the perfect opportunity to understand a new industry by being a part of it. I think VR and Barco are two amazing emerging markets that are being under-credited right now and that have not yet found their audience but are evolving rapidly and I think they will continue to evolve very rapidly. I also think it’s a really fun script and we were able to play around a bit and really enjoy what we did.

SCREAM: The sci-fi/extra-terrestrial market is certainly a crowded one but this one works really well as it’s got one great big B-Movie heart and couldn’t be more self-aware, even if it tried. 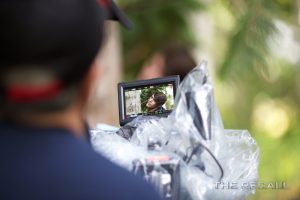 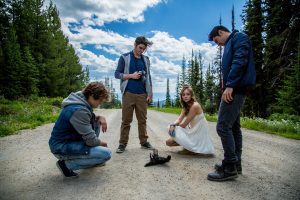 I love the alien invasion market and I hadn’t done anything like this before so when I was offered this role, I just said, “Yeah. Let’s do it.” There was a 50/50 chance that it could turn out to be a horrible movie but I was okay with that and it was an idea I could live with.

SCREAM: But you must have felt you were in good hands as Mauro has been involved in all kinds of big budget sci-fi fare as a concept artist?

We had a fantastic time with Mauro. He’s a character, man! Mauro is a funny dude. It’s still early days for him as a Director so I think he still has a little way to go but I think he’s really good and I’m excited to see what he continues to create. Mauro was also very open to our input which was really quite nice because I don’t usually get that.

SCREAM: Wesley Snipes adds so much to the film and it’s so apparent that he was having an absolute blast playing this larger than life character with some incredibly fun dialogue. You share some great moments in the film together.

I loved it. I didn’t really do too much preparing with Wesley to be honest. Sadly enough, Wesley was only on set for about three days. All the same, it was great because I’m a massive Wesley Snipes fan so I was really excited and thinking, “Holy shit! This is Blade!” Obviously, I knew it wasn’t Blade (laughs), but that was what kept coming to mind. But it was fun and we enjoyed creating this quirky little story and I think it worked out really well.

SCREAM: We can’t not speak about the effects which are a 50/50 mix of CGI and practical with both proving themselves to be very effective. I’ve been a big fan of Emersen Ziffle’s effects wizardry for ages and he delivers the goods once again here.

The practical effects really killed it, right? Without them we would have been in trouble. It was all very basic, yet at the same time very complicated. It was a nice experience because I’d done supernatural thrillers and things like that before but it was my first time doing a film like this and the make-up and the practical effects were just so much fun. Some of my favourite scenes in the film were the ones that involved the special effects and me in a lot of pain. 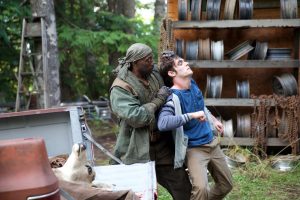 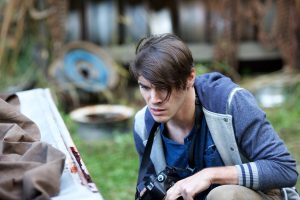 SCREAM: Just to finish off, are you able to tell us a bit about a couple of films you have coming up? One is a high-school wrestling story called Triumph which also stars your sister and another I’m really intrigued by is a supernatural film you’ve got coming up called Adi Shankar’s Gods and Secrets.

Sure. Triumph is about a guy with cerebral palsy who wants to wrestle and when he gets an opportunity, it changes his life. We’re still in the middle of shooting right now so we’re just waiting to see what happens with that. It’s loosely based on the life and experiences of the creator, Michael D. Coffey and I think it’s going to be really good. Colton Haynes was in it too and he was a blast to work with.

And then Gods and Secrets is sort of a darker take on The Justice League and superhero stories and I’m excited to see how it plays out. We’ve been working on it for like two years now. It’s definitely been a labour of love and it’s looking really insane. I’m really happy with what we’ve done with it.