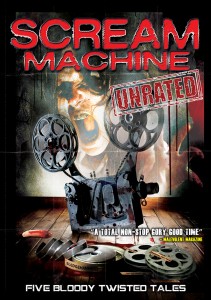 Scream Machine is an anthology horror film that features five gruesome tales that are designed to, I quote, “Devour your soul until you puke your guts”.

There has not been a lack of anthology horror films lately and many of them are of middling quality overall. The ABCs of Death and V/H/S franchises are the most notable examples that feature some segments which soar and go beyond expectations, presenting truly scary, frightening and surprising short stories of terror. Others are just plain poor. It’s rare for a horror film of this type to be totally awful with no segments worthy of being watched, but Scream Machine offers very few redeeming factors and confirms itself as one of the worst compilation horrors you could ever watch.

When a film is made on a remarkably low budget it can go one of two ways. Either, it can be applauded for its efforts, doing well with its lack of funds and actually being quite charming as it tries to do a lot with a little. Or, it can be downright, truly terrible; less charming and more insulting in its attempt to label itself as entertainment. Sadly, Scream Machine falls in to the latter category; offering very little to enjoy in its dire attempt at presenting puke-worthy and stomach-turning terror. Rather than being the entertaining throwback to horror films of times gone by it so desires to be, Scream Machine is a tedious, tiresome and boring collection of forgettable twisted tales.

Putting aside the negative aspects of the film, it can’t be denied that this is an anthology of sick, gory stories. If you’re after something a bit gross, then look no further. If you don’t mind seeing practical effects that look about as real as a horse dressed up as a unicorn, even better. If you can look past the student film-feel carried throughout, perfect. Despite how it may seem, I actually went in to this film with high expectations and my dislike for the film is stemmed mainly from its squandering of potential. The main problem with Scream Machine is with its cast. The acting is shockingly wooden and forced, making the whole film almost unbearable to watch. It is impossible to immerse yourself in a film when it is so obvious the people you are watching are acting; it becomes distracting and frustrating the more you watch and the film’s hope for inciting any amount of fear is lost in an abyss of incompetency.

The short films themselves are quite abysmal, regardless of how poor the acting is. The script is juvenile and laughable, devoid of any amount of intelligence, wit or skill. Most of the scenes feel unscripted and I wouldn’t be surprised to learn that the majority of the film was improvised with the characters saying whatever they wish at any given moment. The third segment of the film sees a group of adults try to terrify their friend on April Fool’s Day by donning masks and hanging around outside his house; this is the level of maturity Scream Machine beholds. If this was a bunch of kids, it may be slightly funny, but this is a group of 30-somethings wearing cheap masks saying, “you guys are the shit, this is gunna be awesome.” Oh, please. They also try to “totally wig him out” by pranking him on the phone beforehand. Scream Machine’s hilarity really knows no bounds, am I right? At this point, I’ve lost all hope for this to get any better or at least become slightly enjoyable. As expected, it does not and there are still 2 more shorts to get through, sigh.

All in all, Scream Machine is terrible. Even if it had more money to splash around with I doubt it would have been able to create anything worth watching. It’s a shame, because the idea is not bad and it’s inexcusable for it to have amounted to something so entirely unwatchable, forgettable and amateurish.