The Scream We All Love To Hate

That spine-tingling sensation, the cold and clammy shiver which envelopes us. We look behind our shoulders because we’re 100% sure that someone is watching us from that dark corner on the other side of the room. We hug ourselves for warmth but nothing seems to dispel the disquieting notion that we are no longer alone. We focus back on the TV we had been watching and scold ourselves for letting the movie we had been watching affect us so. We can’t help it though – we have goosebumps on our flesh and by the end of the movie, we’re never opening a closet – or closing it – the same way again. But guess what? We love it. 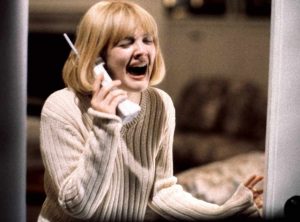 Horror, a history
Horror is not something of our generation though, far from it. The first horror movie recorded was the 1896 “Le Manoir du Diable”, spanning just over 3 minutes but managing to encapsulate within it all the elements we recognise today as being ascribed to the horror genre: bats, witches and the lot. But it wasn’t until 1919, with “The Cabinet of Dr Caligari” that we get to see what is now considered the “granddad” of all horror movies. A dark picture, cleverly made and which follows the tale of a madman, only, we’re not too sure who is mad or sane in the whole plot, making the picture deeply unsettling.

Back then, directors took inspiration from painters to help them create the mood. Photographers of the period, inclined to dabble in the world of spirits by retouching their photos to include something from the netherworld, were also a source of inspiration. But much can be said about the audience, who held a strong inclination for the Gothic, the freakish and the macabre, with post-mortem photos and people who had peculiar body defects locked up in cages to be ogled at.

Horror, today
To this day, man still has a penchant for the creepy and unnerving. Many, for example, would prefer the words of Stephen King to any happily-ever-after novel, a ghoulish trip in a Haunted House or scary-themed online games to a jerky rollercoaster or a shot at a mission on GTA. Maybe it’s the prickling sensation we seem to constantly lust after. Even after having watched a movie which literally scars you for life, you know you won’t be able to resist watching the next one, even if it scars you all over again. We are helpless – which is why Hollywood releases an average of 30 – 40 horror movies per year. An astounding number, considering only very few of them would be worthy of a mention. Hollywood keeps churning them out because it knows people will still watch them. Which they do – and with great zest.

I’d like to show you my top four horror moments, of which I have very fresh memories of. Not because I have a particularly good memory (I don’t, in fact), but because by their very nature they stuck around in my mind, long after I wished I had forgotten all about them.

1) The Drowned Girl in the Closet, The Ring
There was something totally unexpected in this scene, so early on in the movie, that shook me to my core. A girl, in an advanced stage of death by drowning, sits in a closet. Knees up to her chest, hands to her face in what is clearly a distressed pose. Then, her head lolls down as the door is opened. Nothing stayed as fresh in my head, despite the fact that the movie – especially the original Japanese version of the Ring – teemed with horrific scenes.

2) The Mutation in The Fly
Guillermo del Toro best described what makes this movie so compellingly frightful, in that we see man’s decay. Not much different in idea than The Portrait of Dorian Grey, we see a man so consumed by his own invention that he fails to recognise that he is turning into something else – a monster. Geena Davis’ dream of delivering a pupa instead of a baby has us squirming in disgust.

3) The Clap Clap scene in The Conjuring
There’s something about children’s games or children’s toys that, when incorporated in the horror genre, get to us in a way few other things do. Perhaps it’s the innocence we associate with them, which is being twisted for deadly purposes that we find a tad bit too creepy. Which is why The Conjuring remains one of those movies I know I’ll never watch again. The director uses a kid’s game to lure the characters to the basement. And we all know what happens when you do go down the basement… 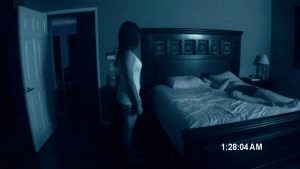 4) Paranormal Activity – Blair Witch Project
You may immediately see the common theme here – video footage. Even if the movie is an entire flop, the fact that it is footage I could easily have taped myself adds another element into the mixture: reality. Although you know it is not real, your mind can’t help but think it is. It’s raw, unedited (or so it looks) and there’s absolutely no CGI – none that you can see at least. So it has to be real… right?

Whatever our reason, we all love that occasional scare. For myself, I’ve started enjoying it more when surrounded with a lot of people, who make a lot of noise during the worst bits and who take 70% off the fright. Might be the age but I just can’t handle the scares as I used to.