Since launching as a small indie horror mag, Scream has grown massively in size, reach and quality, and it’s all thanks to you beautiful people reading it every 60 days. 2016 has been a particularly big one for us, seeing the magazine go on sale in branches of Barnes & Noble across the US, making it even easier for our American friends to get their bi-monthly horror fix. Here in the UK, the mag’s been available from HMV and Fopp for some time now, as well as Forbidden Planet and over 400 newsagents. As if that weren’t enough however, as of December 31st you’ll be able to purchase Scream from branches of high street giant WH Smith, just in time for our 40th issue. 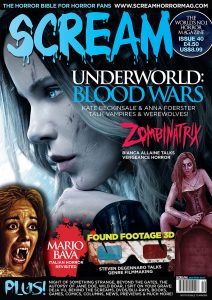 In issue 40 you’ll find interviews with Underworld: Blood Wars star Kate Beckinsale and director Anna Foerster, Zombinatrix star/producer Bianca Allaine, the cast of I Spit on Your Grave: Déjà Vu and Wild Boar director Barney Burman. We also hear from Beyond the Gates director Jackson Stewart and Night of Something Strange director Jonathan Straiton, while André Øvredal dishes the dirt on his latest, The Autopsy of Jane Doe. There are also features on the master of Italian Gothic, Mario Bava and the history and mythology of Bigfoot cinema, as well as regular columns 21st Century Frights, VHS Ate My Brain and Behind the Screams, plus a whole bunch more.

So before you embark on your New Year’s celebrations, pop down to your local Branch of Smiths and pick up a copy of the world’s number 1 horror mag. We can’t promise it’ll help with that hangover, but it will provide you with some bloody good reading to kick off your 2017.