A brand new poster has been released for Adam Robitel’s (The Taking of Deborah Logan) Escape Room. It shows someone screaming for freedom as they try to escape the room they’ve been trapped in. Hence the title, I guess. 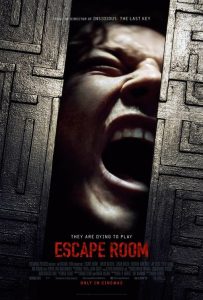 Robitel most recently directed Insidious: The Last Key, but don’t let that put you off. His directorial debut, The Taking of Deborah Logan, was an intelligent, important balance of horror and drama that is well worth a watch.

Robitel is leaving his serious side at the door for this one, because Escape Room follows a group of people that agree to an immersive escape room challenge that fast turns into a fight for survival. Remind yourself of the trailer below, it teases a concept that blends the wicked sides of Saw, Cube and the post-modern fun of The Cabin in the Woods.