Scream Factory is releasing collector’s editions for some brilliant horror films this year, including The Exorcist III, Carrie and The Thing. They are also offering that creepy doll Chucky a collector’s edition with Child’s Play which is set to be released on 18th October, so just in time for a cheeky Halloween treat.

The full list of special features for Child’s Play has now been revealed and it is as follows: 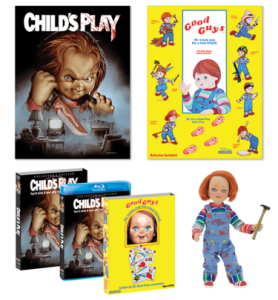 You can also order a DELUXE edition of the Blu-ray which comes with two slipcovers, two posters and a limited edition Chucky doll from NECA. If you’ve got a few extra pounds on you, then that one is definitely a must-have.