Scream Factory to Release The Binding 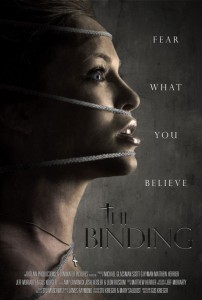 Scream Factory will be releasing The Binding, which is a psychological thriller from Gus Krieger who will write, direct and produce. The film will be his first full-length feature as a director, but he directed the segment ‘Marmalade’ in the anthology flick World of Death in 2014.

The Binding follows a woman who puts her faith to the test when she must uncover the truth about her husband’s terrifying visions. The full synopsis is as follows:
Once upon a time, God Almighty appeared before one of the chosen, and commanded that he slay his own flesh and blood. Perhaps that time has come again…

Sarah Iman (Amy Gumenick) is a young mother and faithful minister’s wife. Her religious devotion and idyllic home life, however, are put to the ultimate test when she is forced to uncover the truth behind her husband’s horrific visions. As tensions rise and secrets come to light, Sarah soon finds herself spiraling toward a terrifying choice between faith and blood.

You can watch the spine-tingling trailer below, which looks suitably spooky and claustrophobic.

Scream Factory will release The Binding on DVD on Blu-ray on 2nd August 2016.