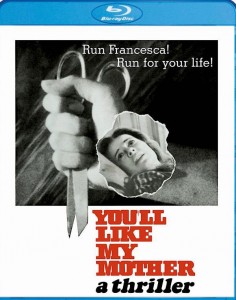 Scream Factory will be bringing You’ll Like My Mother to Blu-ray for the first time next month and it will come complete with a host of features, including an interview with actors Richard Thomas and Sian Barbara Allen, a Photo Gallery and the Original Theatrical Trailer.

You’ll Like My Mother is a thriller originally released in 1972, directed by Lamont Johnson and based on the novel by Naomi A. Hintze. The story follows the recently-widowed and pregnant Francesca who heads to Minnesota to meet her late husband’s mother. However, her hopes of being happily greeted are shattered when the reunion turns into a nightmare.

We love to see older films getting some blu-ray love, so be sure to grab a copy of You’ll Like My Mother when it is released on 10th May.