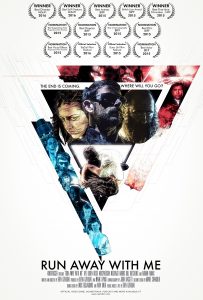 The sci-fi thriller Run Away With Me is set to screen at the British International Film Festival this April 25th, but it will be released worldwide on 2nd May. The film will be hitting iTunes first, but will move to other platforms later on in the year.

Synopsis:
The future. One of the last remaining cities on Earth. Abraham, a former soldier, has come out of prison for a crime he was forced to commit ten years earlier. With no way of reclaiming the idyllic life he once led, he accepts work from a mysterious benefactor named Ingram. Abraham is tasked with a dangerous mission to save humanity. Along the way he forms a relationship with Marja, a strikingly beautiful woman with a link to Abraham’s past. All is not what it seems as time runs out and Abraham questions where his loyalties lie: the woman or the mission? Abraham and Marja run away from the authorities and criminals that make up the city. The fate of humanity hangs in the balance.

Run Away With Me comes from first-time Turkish-British director Eren Ozkural who has been likened to film-makers Neill Blomkamp (District 9, Chappie) and Gareth Edwards (Monsters, Rogue One). The film has won five awards including Best Director and Best Actress, so it’s definitely been a hit at the festivals with critics.

When speaking about the film, Ozkural said:
“We shot the whole movie in 12 days. I would go on to serve not only as the writer/director but also as the camera operator, editor, visual effects artist, colourist and composer. Every job had its own challenges however the biggest toll on me was time. Post production lasted three and a half years. That was three and a half years of solitude, 16 hour days, 6 days a week. The result? An original story. Great performances. A vibrant 4K finish with blockbuster VFX and sound.”

It sounds like a tiresome and important journey for the director, but the promise of an original story, great performances and impressive VFX sounds like it was worth the commitment. Be sure to grab a digital copy of Run Away With Me from 2nd May.