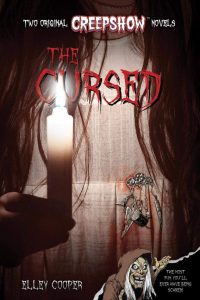 Called Creepshow: The Cursed, the book was written by Elley Cooper. The first tale of terror will see a girl’s fantasy of living in an earlier era becoming all too real after she buys a piece of antique jewellery. And in the second story, a pair of teens encounter a green glowing figure in the woods whose desires are as mysterious as its origins…

Creepshow: The Cursed is currently available for pre-order. The book will release on April 6th.