Everybody remembers the first time they saw something truly scary on the television. Indeed, for many people, it was a TV show, not a movie, that provided that tantalising gateway into horror that led to a life-long fascination. And since horror TV is having a moment, there’s no shortage of those gateways right now—not to mention a wealth of binge-worthy content that’s kept us all entertained throughout quarantine. 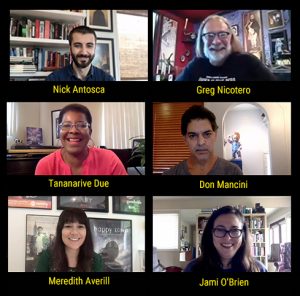 Comic-Con at Home’s “Scary Good TV” panel, presented by Shudder and moderated by Tananarive Due, explored the reasons behind this renaissance, as well as the evolving nature of showrunning a horror series. Joining Due were five of the leading showrunners working in horror TV today: Meredith Averill, co-showrunner on both The Haunting of Hill House and Locke & Key; Don Mancini, creator of the Child’s Play franchise and showrunner of the upcoming Chucky series; Nick Antosca, creator and showrunner of Channel Zero; Jami O’Brien, showrunner of NOS4A2; and Greg Nicotero, showrunner and executive producer of Creepshow and a long-time executive producer on The Walking Dead.

So, why is horror TV so big right now?

“Historically, you see horror having a renaissance in moments of cultural unrest,” says Antosca. “The movie that made me want to tell stories or be in the horror space was Night of the Living Dead, which I saw at probably eight or nine, way too young to understand that it was a microcosm of society… I think the best horror—the horror that we love and that really lasts—is about something else.”

For O’Brien, the rekindled interest in horror TV that arguably began with The Walking Dead may have an even simpler explanation.

“I always try to think of the psychological reason for it,” she says, “but I wonder if it’s just because it’s kind of fun!”

Nicotero, meanwhile, believes that the rise of another medium may have influenced this trend: video games.

“One of the reasons why I think that The Walking Dead initially reached out to a really broad group of people is that a lot of kids were playing House of the Dead or Resident Evil,” he says. “I do think that horror video games really did a lot for opening up horror television.”

Of course, the nature of horror TV has also changed a lot since its last golden era, which may be drawing in more fans. Today’s horror shows can get as down and dirty as any theatrical release, ensuring that fans of both psychological thrills and stomach-churning gore can find something to satisfy.

“We do stuff on TV that they told us we couldn’t do in movies as recently as 10 years ago,” Nicotero says. “The stuff that we got away with on The Walking Dead in season one was more than George Romero could get away with on Land of the Dead.”

That said, the platform a series lives on can have a huge impact on what can and cannot be said or shown. Averill, for example, had to go through the scripts for Netflix’s Locke & Key and remove the vast majority of expletives—an exercise that made her realize some simply weren’t necessary. Mancini, on the other hand, had to be certain that the foul-mouthed Chucky could continue dropping F-bombs before allowing his upcoming show to find a home at the USA Network and Syfy.

For Antosca, who served as a writer on Bryan Fuller’s Hannibal, how the gory show ever aired on network TV remains something of a mystery.

“I think stylisation is one’s friend if you’re on network and you’re faced with those limitations,” says Mancini, who also worked with Antosca on the show. “I think Nick and I learned from Bryan Fuller to view those challenges as opportunities to do something more interesting potentially. Because a lot of times, the implication of violence, as a visual cue, can be more interesting than the gore itself.”

The platform can also impact how audiences consume and talk about a show. The panel was torn about whether, from a showrunning perspective, dropping all episodes at once—as Netflix typically does—or airing them one by one is the most effective option.

“It’s very hard as an audience member, and I think as a creator, to make a 42-minute episode of television and build that tension, sustain that tension, and then the episode’s over and next week you kind of have to do it all over again,” says Averill. “How do you get people back in that space? So that’s why, working in streaming, I’ve found that to be easier, because you’ve already got them in that space.”

While Antosca enjoys a good binge-watch, he also finds that episodes stick with him more if he has to wait for the next—something that O’Brien has found, as well. As a creator, Antosca prefers a compromise of sorts: dropping a few episodes at once to give people a taste, then making them wait for more.

“When you have that week-long pause… in the midst of all that anticipation and suspense wondering what’s going to happen next week, people are talking about it,” Mancini adds. “I think that that’s really valuable with regard to the story’s staying power.”

For more insights on what goes into making scary good TV, watch the full panel below!