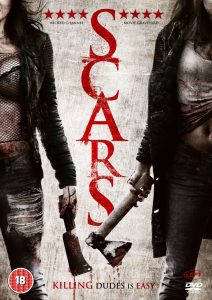 Synopsis:
Scar and Scarlett bond over their mutual hatred of men, deciding it’s time to go on a killing spree. However, when a mysterious police officer starts asking questions it becomes only a matter of time before their murderous actions are revealed.

Scars shows a woman pushed to the edge, sick of being poorly treated by her partner and deciding enough is enough. She kills him, chops the body up in the bath and carries on with her life. We later discover that she’s also the daughter of an alcoholic father and there is no mother in the picture. She has a clear issue with men and it’s been bubbling within her since childhood. Thus, when she stabs her boyfriend in the heart and leaves the flat to go on murderous man-killing spree, we sort of get why. Known only as Scar, her desire to empower women through her sexuality and her ability to kill propels this post-feminist slasher, but the film falls short of hitting the mark it so desperately reaches.

At its worst, Scars is a painful experience for the audience and victims alike. The two killer ladies, played by Danielle Cole and Neale Kimmel, have zero chemistry on-screen. Whether this is the fault of the script or the actresses, they are without the charisma and personality that is necessary to portray women who think “killing dudes is easy”. Sure, Scar (Cole) is a “punk”, donning black lipstick like there’s no tomorrow as she struts around breaking things and Scarlett (Kimmel) demands money from the married men she is sleeping with, but they are just simply not convincing. Far too many scenes show Scarlett drinking wine – red, of course – and she can’t even do that convincingly. It’s all there on paper, but when executed, these strong women are not quite the badasses that have been written.

The technical side of Scars is even less impressive than the performances. The transitioning between scenes is without any flow, with moments halting at a dead stop when the screen changes to black. I thought my television broke the first time it happened, but by the 134th time I was ready to chuck the television, the blu-ray player and everything I own out the window. The decision behind this cutting is a mystery to me, because it is ugly and interruptive, ruining any sense of connection between different scenes. The lack of smooth transitions dangerously hinders enjoyment of the film, because many moments feel unfinished.

Adding to this was the film’s lengthy runtime of almost 110 minutes. I began to question whether there was an editor at all, or if every frame that was shot made the final cut as an attempt to make this an unnecessarily epic slasher flick. There are some great flashes in Scars, for example in the aforementioned violence, but if the film had opted for a shorter and snappier length of, say, 85 minutes, it would have emphasised its keenness to hark back to the days of ’80s exploitation. Instead, the film opts for some strange, but not uninteresting, ideas that include a shoe-horned in political commentary.

Contributing to the film’s editing problems comes with about 10 scenes that show Scar and Scarlett watching a bit of TV, but it’s always the news. These single deadly females are watching the news when they aren’t killing. They never discuss it or offer opinions on what they’re watching, but they’re watching it. The silence is obviously for the audience’s benefit, so that we can hear the political TV ramblings from America – which is fine, because America has a lot of shit to death politically right now – but the characters seriously need to interact with it or it’s going to have no impact. Scarlett does go on a date with a guy who talks about Bush as president, but again, Scarlett’s lack of interaction with the topic just makes her look a bit ditzy, suggesting her killer intentions are not too intelligent. A politically educated and stone-cold killer female sounds a lot better, doesn’t it? Instead, we have the suggestion that the political climate is a contributing factor to these girls’ desire to kill and, honestly, the film could have done without this daft indication.

For all its shortcomings, there is something undoubtedly entertaining watching two women on the rampage, even though this is nothing we’ve not seen before. Exploitation movies have been showing mindless, shamelessly entertaining killing for decades, but when Scars it at its best, it embodies the greatness of female revenge thrillers like I Spit on Your Grave with its courageous violence. There is an unmissable desire to push the limits of cinema here; the scenes of murder are bold, especially a particularly neon-bright, night of killing that interrupts the film’s flow in a way that is effectively jarring and inventive. Scars was 45-minutes in at this point and with almost an hour to go, this injection of life and flash of creativity was very much needed. It is sad to note that much of what follows reverts back to the film’s previous sadly unimaginative canvas, resulting in Scars feeling like a tiresome trip in dire need of excitement. 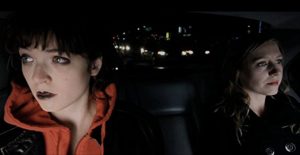 Suffering from an over-long run time, hideous editing and poor acting, Scars is an average mess. There are parts that are laughably bad, but the simple, striking violence is enough to get you to the end. Just.