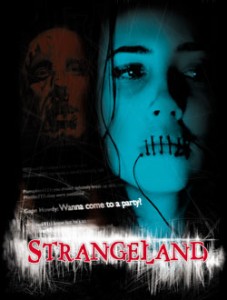 Emaji Entertainment have been exceptionally busy getting under way with plans for their first productions, and they’ve planned another remake in the form of 1998 horror film StrangeLand.

Dee Snider, front man of heavy metal band Twisted Sister, originally wrote the film and starred as psychotic killer Carlton Hendricks aka Captain Howdy. His portrayal of Captain Howdy caused the fictional character to become a cult horror legend, so it’s good news that he will be reprising his role. Emaji will work alongside Snider to bring the legend back to life as victims are lured into perverted torture through the use of the dark and mysterious social media world.

The remake is not being dubbed as a remake – most likely due to how much us fans can moan about remakes – it’s being labeled as a reboot and will be titled StrangeLand: Disciple. The film was almost created before its time as it played upon technological horror as Howdy used the sinister Internet to lure naive girls into his deranged dungeon. StrangeLand will be adapted for a modern audience and will mostly be more of a continuation of the story.

In StrangeLand, one of the most notable features was the incredible metal head heaven soundtrack that features bands System Of A Down, Down, Sevendust, Soulfly, Slipknot, Kid Rock, Coal Chamber, Twisted Sister, Megadeth, Marilyn Manson and Pantera – all hand picked by music lover Snider.  “Music was intrinsic to me in the first one. We really tried to create the ultimate heavy soundtrack. Music will be important to me again for this film,” adds Snider.

Robert Englund will also return as his character Jackson Roth, so there’s high hopes that this remake will truly bring back that vision of underground terror at the hands of a sadistic, body modification fetishist that takes pleasure in mutilating young girls in his front room.

Synopsis:
A year after Captain Howdy’s perturbed rampage, his victims are left with physical and psychological scars that will never truly heal. After their lives were destroyed by the incidents and by the media intrusion, Detective Mike Gage, his daughter and vigilante Jackson Roth are given the chance for retribution and revenge. Carlton Hendricks is moved from mental hospital to a body modification fetish place called The Torture Garden, by millionaire Morgan LaForce. This garden may be the only place the victim’s will ever find closure.