Say Hello to Weyland-Yutani in the First Image from Alien: Covenant

The first image from Alien: Covenant has been revealed while the film continues its production in New Zealand. The picture shows a uniform badge for Weyland-Yutani who are, apparently, “Building Better Worlds”. The Weyland CEO Peter Weyland (Guy Pearce) and his daughter Meredith (Charlize Theron) were killed in Prometheus, so this could explain Weyland’s merger with Yutanai.

Covenant’s story will continue 10 years after the events in Prometheus when a new crew head to a remote planet that has only one inhabitant: David. Michael Fassbender is set to reprise his role as the synthetic model and other cast members will include Demian Bichir, Katherine Waterston and Danny McBride.

Check out the image below and Alien Covenant: will be released on 6th October 2017 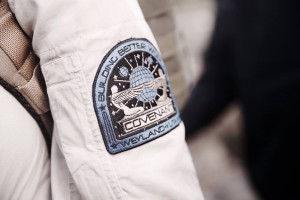